First dates are awkward. You’re forced to sit opposite someone who could potentially be the love of your life, making small talk while wondering whether or not they can sense the subtle tone of desperation in your voice. Here are a few top tips to help ease the tension. 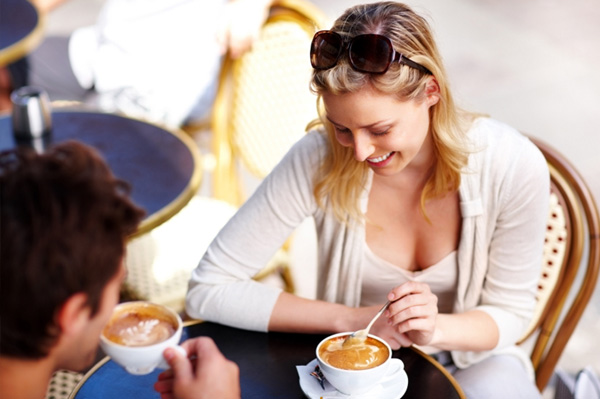 What to say when you’re on a first date

Since many men’s magazines list “ask her questions” as the top priority for first dates, expect him to come at you with so many inquiries that you feel like you’re sitting at a press conference.

However, if you take a genuine interest in his life, it’ll make for a nice change of pace. As long as he doesn’t hopelessly bore you with talk of the NFL draft, it’ll ensure that you both become more open and knowledgeable about each other, making it easier to decide whether or not you want to do this a second time.

What to do when you’re on a first date

Body language is important, as he will take most of his cues from how comfortable you seem around him. If you spend most of the date with your arms folded and make minimal eye contact, then he’ll presume you’re uninterested, whereas a gleaming smile and subtle, flirtatious touching will convince him of the opposite.

Also, don’t just expect him to pay for you — offer to contribute! Even if he accepts your contribution and is therefore a complete tool, just by making this gesture, you’ll lead him to believe that you aren’t materialistic.

What to avoid when you’re on a first date

Unless he brings the subject up with you, talk of previous relationships is strictly forbidden. You may think that portraying your ex-boyfriend in a negative light will ensure him that “you’re over it” and ready to move on, but in his mind, he’ll be wondering whether or not it was you who was really the problem.

Also to be avoided are the strict “Dating Regimes” that women tend to employ. Just because you don’t usually kiss a guy until the second date or invite him back to your place until the sixth, doesn’t mean that you shouldn’t accommodate for change every now and again. If you’ve really enjoyed the date, but then you swiftly jump in the cab before the kiss goodbye, you’re sending him mixed signals that will lead him to believe you weren’t that into it. Allow for some spontaneity.

More on what he knows