Welcome to Love Happy, where we help you successfully navigate the ups and downs of relationship life and share simple tips for keeping love fun, fresh and on track. All couples fight. Whether we like it or not, it’s a fact of relationship life, but the point isn’t to stop arguing all together. Instead, it’s to argue in a way that actually helps improve your relationship. This week, we look at a few simple ways to do that. 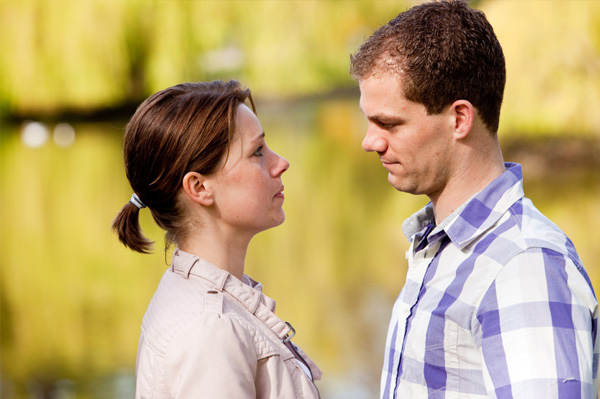 Having been in a relationship for several years, I know the difference between a fight for the sake of fighting (How DARE you leave dirty socks on the floor?!) and having an argument that will result in us getting over a frustrating relationship hurdle. The more you know about each other, the better you get at having efficient arguments that move your relationship forward. To get an idea about how to best do this, I asked Sharon Rivkin, MA, MFT and author of Breaking the Argument Cycle: How to Stop Fighting Without Therapy, to share some of her top tips with SheKnows.

Couples fight for all kinds of reasons, but when it all comes down to it, most fights happen because something important is at stake, Rivkin says. “We want to be heard and appreciated, and we feel we’re not, so we fight to be validated.” How much do we fight? According to a recent study, 312 times a year – which comes alarmingly close to once a day!

If you and your partner seem to fight about the same things over and over without resolution, Rivkin says there may be deeper issues at stake. Couples really believe that they’re fighting about chores, kids or money because they have no idea that a superficial topic is actually triggered by deeper issues, she explains. “No one has ever told us that we need to find out what we’re really fighting about before arguments can finally be resolved. That’s why arguments keep repeating themselves in different forms throughout the relationship.”

Getting to the root of the argument

Getting to the root of an argument while it’s happening takes education, determination and tools, Rivkin says. That’s why she developed a three-step system called the First Argument Technique, which helps couples find out what is really triggering their fights. It starts by peeling away the content of a couple’s first argument to reveal each partner’s core issue (e.g., unresolved childhood issues that make them react so strongly). Once this information is revealed, couples are able to finally understand each other and why they’re fighting, Rivkin explains. Then, when issues do arise, arguments are resolved quicker and happen less often. “In short, if you don’t know what you’re really fighting about, you will never resolve your issues.”

Rivkin shares some of the biggest mistakes couples make when they argue:

How to fight right

When you feel yourself getting upset at your partner, Rivkin suggests you do the following:

Having a successful argument means learning from the fight, Rivkin says. Get to the root of the problem in an argument so you understand your partner even better. When you do this, you’ll have compassion and intimacy, rather than distrust and distance, and will have a greater chance to resolve the conflict and avoid getting stuck in unending patterns.

Hey, it beats spinning your wheels with constantly arguing about dirty socks being left on the floor!