Guys can be crafty when it comes to showing just enough affection that they seem to be really into the relationship, but when it comes to taking the plunge into love, they end up being much less into things than you realize. To help you spot any less than well-meaning guys currently in your life, we’ve put together some telltale signs that their feelings might not run as deep as yours. 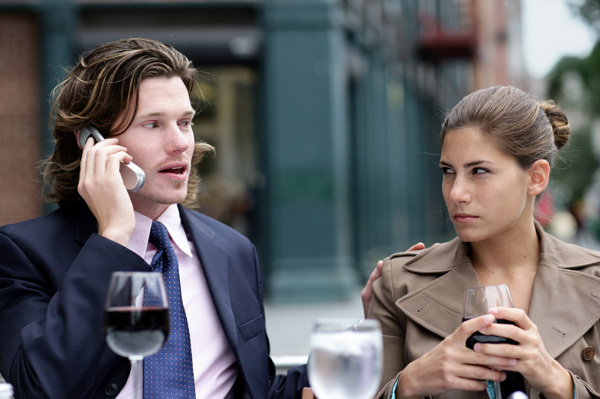 Not doing what he says he’s going to do is a problem and a red flag. We all have to back out of plans now and again for various reasons, but if he says yes – then bails – all the time, he likely doesn’t have that much invested in your relationship. There is no way to build trust with someone who doesn’t care enough to follow through on his word, and you can’t have a functioning relationship without trust. You may have a great time with him when you are together, but if he can’t – or won’t – make an effort to be available on anything but his own terms, his level of caring just isn’t there.

This one is tricky and depends on several factors, including how long you’ve been together and what level the relationship is at. If you’re living together, but he just doesn’t want to get married, you could just be dealing with someone who’s wedding-phobic or who doesn’t necessarily believe two people need rings and a piece of paper to solidify their love. If you’ve been together for three or more years and he refuses to move the relationship forward (e.g. won’t move in with you or talk about marriage), you might want to question whether or not he actually loves you. You don’t need a ring in order for him to prove his love, but eventually he’s going to have to move things past the “dating” stage and either agree to move in together or at least figure out a plan for when that’s going to happen.

Lots of guys get in moods where they just want to hang out with the guys – and that’s OK. Being in a relationship doesn’t mean doing everything together all the time. But if he’s always blowing you off and making plans that don’t involve you, consider it a bad sign, especially if you’ve been together a year or longer. He doesn’t need to be at your beck and call or by your side 24/7, but he does have to feel a need to spend time with you and put you above his friends or hobbies some of the time.

He gets more than he gives

If you’re starting to wonder about your man’s level of love and commitment, think about how much you bring to the relationship versus what he does. What is the balance like? If what you give tips the scales compared to his contributions, think twice about investing much more in this relationship. When we talk about giving we’re referring to anything from impromptu hugs and kisses to gifts to gestures that show caring and affection (putting gas in your car, cooking you dinner, planning a date night). If these are all things you do, but he seldom does, he’s either become complacent and lazy or he doesn’t care quite enough to do his own share of giving.