The landscape of daytime television will dramatically change next year when soap operas All My Children and One Life to Live go off the air, cancelled after more than 40 years on television. No one knows what the demise of these shows will mean for television and for the affected actors better than Guiding Light veteran and one of daytime’s favorites, Kim Zimmer. We caught up with Zimmer, who just released I’m Just Sayin’!: Three Deaths, Seven Husbands, and a Clone! My Life as a Daytime Diva (New American Library, August 2011), to talk with her about her life and lessons she’s learned.

Related story There Are Some Major Health Benefits to Cuddling & Wow, Do We Miss It 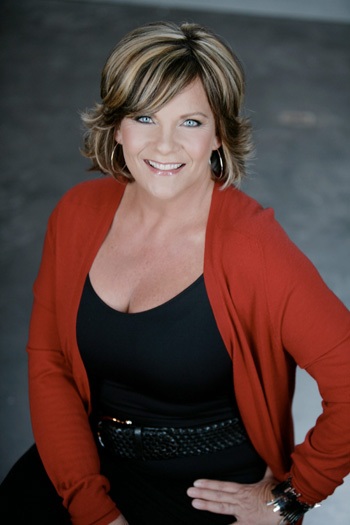 Zimmer, a four-time Emmy-winning actress, is known around the world for her 27- year portrayal of Reva Shayne on the popular daytime drama Guiding Light. While on the show, Zimmer played a vixen, a manic-depressive, an Amish woman, a time traveler, a Civil War belle, a talk-show host, a cancer survivor, a loving mother and a devoted wife. But now in her new memoir, Zimmer shares the story of the woman behind Reva — from her beginnings as a small-town Midwestern girl to landing one of the greatest roles in the history of daytime television and becoming a soap opera icon. She is blatantly honest and wildly entertaining as she takes readers on an insightful journey through the parallel lives of Reva Shayne and Kim Zimmer and chronicles the stories behind Guiding Light, the longest-running drama in television and radio history (a whopping 72 years!). Here’s what she wants to share with readers.

Actresses have work and family challenges, too

SheKnows: What inspired you to write I’m Just Sayin’! and who are you writing it for (young women, soap fans, those interested in self-help, anyone, everyone, etc.)?

Kim Zimmer: I was moved to write the book because of the out pouring of love and concern from the many fans of our show. They had questions as to why and how they could take it off the air. So the book started out as a reply to the questions I was asked at events across the country, but quickly evolved into a reflection of my life in the world of daytime television. I never intended to write a memoir but I think when you’ve spent as many years (28) with a family of people, all working together to create a show we created 5 days a week for 57 + years, there are memories to share! I have spoken to non-soap opera people who have read the book and come away with a new understanding of not only the soap opera genre, but also actors who have the challenges of work and family.

There is always more to a story

SheKnows: In your book, you talk about your challenges with alcohol. For readers who’ve not yet picked up I’m Just Sayin’!, can you describe how alcohol impacted your career?

Kim Zimmer: I never had a “struggle” with alcohol — it was more a case of having a glass of wine with lunch to smooth the edges of a stressful day on the job. There were days and weeks that would go by when I didn’t have a glass of wine. I know that there are people who want to believe I was going to work drunk everyday — that was not the case and if they read the book they will understand more about where the “drinking” came into play. I am not an alcoholic and have never had a struggle with alcohol. I do enjoy wine with dinner and on occasion have overindulged and one of those evenings ended with a DUI. It was stupid and irresponsible and I have learned a very valuable lesson from the consequences of my actions on that specific evening — don’t drink and drive! It’s as simple as that!

Look at every experience as a valuable lesson 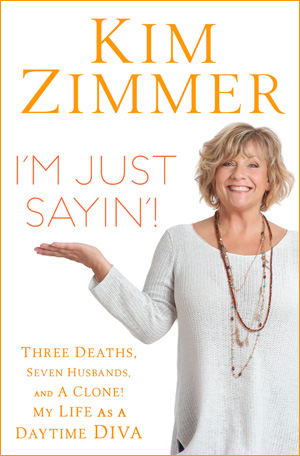 SheKnows: What was the outcome of your DUI?

Kim Zimmer: Via court order, I had to attend a number of AA meetings as well as a DUI class for three months. I must say that I learned so much about the human condition in those meetings. I learned a lot about myself as well. I never dreaded going to the meetings because they were a lifeline for so many who struggle with this awful disease.

SheKnows: You’ve been married for 30 years — what are you and your husband’s secrets to staying happily married?

Kim Zimmer: I truly believe that it all comes down to respect for each other and most importantly, maintaining a sense of humor no matter how difficult things can be at times in a relationship. My husband and I both come from a long line of marital longevity, which I’m extremely proud of.

Common sense for health and beauty

SheKnows: What are your secrets to staying healthy and beautiful?

Kim Zimmer: Wow, that’s the nicest thing you could have said to me! LOL! I’m a bit bohemian in my approach to health and beauty. I did have a partial facelift when I turned 40 (16 years ago) but I haven’t tried Botox or collagen, and when I look in the mirror, it’s pretty obvious. I do the basics, though: I eat well; I don’t exercise nearly as much as I should, but I also go by the “if it ain’t broke, don’t fix it!” religion. I have learned that the basic checkups, at least at my age, do become vital. Mammograms, paps … I have yet to schedule a colonoscopy but that’s next on my list!

SheKnows: Where can your fans find you these days?

Kim Zimmer: If they check my website KimZimmer.net they will see where and what I’m doing! Thanks!

6 Blues-busting strategies
Mental health: Can you get over childhood trauma?
Overcome toxic emotions to improve your relationships

16 hrs ago
by Meagan Morris

20 hrs ago
by Kelly Iverson