After watching countless relationships fail on series like The Bachelor, some may be skeptical that you can really find romance on a reality show. But Love in the Wild host Darren McMullen begs to differ. He’s here to tell us why love in the wildness really works. 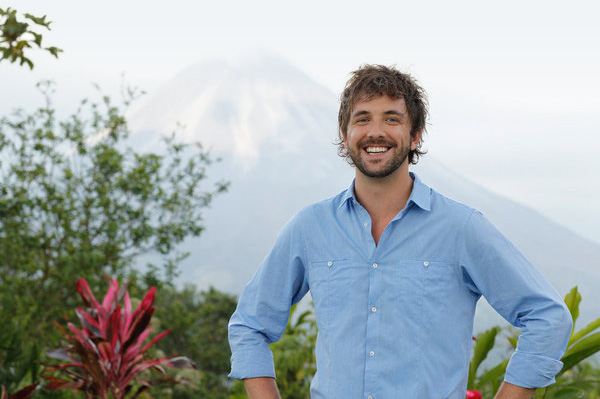 Why love in the wildness works

“It’s based on Romancing the Stone with Michael Douglas and Kathleen Turner,” Darren tells SheKnows of the show’s premise. “They thought, ‘Can we actually throw people into an isolated wilderness together like they do in the movie and will they inevitably fall in love?'”

What they found was pretty interesting.

“It’s almost like a speed relationship,” says Darren. “You find out quite quickly if this person is a match for you because there’s no time for game face. You’re going into croc-infested rivers and your raft is falling apart, you see somebody in their true colors. You either love that, or you can’t stand it and never want to see them again.”

Not surprising to Darren, several couples did want to see each other again. He says it’s because the situations that arise in the wild are much like the situations couples face in real life.

“There’s no champagne dinners and limousine rides and expensive hotel rooms and trips to exotic locations,” Darren tells SheKnows. “A lot of what these people are doing will inevitably be dealt with in a real life. How well you work together as a team. How you deal with stressful situations. Do you have the stamina and the energy to put up with each other 24-7? All those elements are tested in the show. I think that’s probably why it works so well.”

And with the expertise he’s gained helping these couples cope in Costa Rica, Darren is offering up his dating advice to us.

Q & A with Darren

SheKnows: What’s the worst thing a woman can do on a date?

Darren: Talk about how ugly or fat she is. There’s nothing sexier to me than a woman with confidence. Fishing for a compliment is pathetic and annoying.

SheKnows: What are your turn-offs?

Darren: Anyone who says things like ‘LOL.’ And someone who is too serious, who can’t have a laugh at themselves or life. Also, racist or discriminatory banter.

SheKnows: What will pique your interest in a woman:

Darren: Travel. I’m an absolute travel fanatic and anyone who is well traveled and has aspirations to do so, I’m fascinated by.

SheKnows: What’s your favorite look on a lady?

SheKnows: What are your relationship deal breakers?

Darren: Eating cookies in bed, wearing socks and sandals (it’s hideous), and too much makeup. I think a girl is sexiest when she wakes up in the morning and her hairs a mess and she’s in her pajamas.

SheKnows: Tips on getting a guy to ask you out?

Darren: I walk up to a girl and say “Hi, my name’s Darren, what’s yours.” It’s as simple as that. Let the conversation do the rest. The same works for girls.

SheKnows: So what are you looking for in a woman?

Darren:  She’d have to be confident and driven. And somebody that wouldn’t mind traveling as well.

Hear that ladies? If you want a place in this globetrotter’s heart, you’ll have to pack your bags and ditch your bronzer. Darren says the next exotic locations on his radar include the Greek Islands, Ibiza, and Barcelona. Can you say, mi amor?

Check out recaps of Love in the Wild >>