You’ve let loose one heck of a tearful tirade. You’re 100 percent justified in your litany of complaints. Your supposedly loving husband/boyfriend has let you down for the umpteenth time by forgetting to get groceries, picking you up late again and booking other plans on your anniversary weekend. You stand there sobbing and he stares silently. Read on to find out why this often results in a failed attempt that leads to even more confusion and fault. 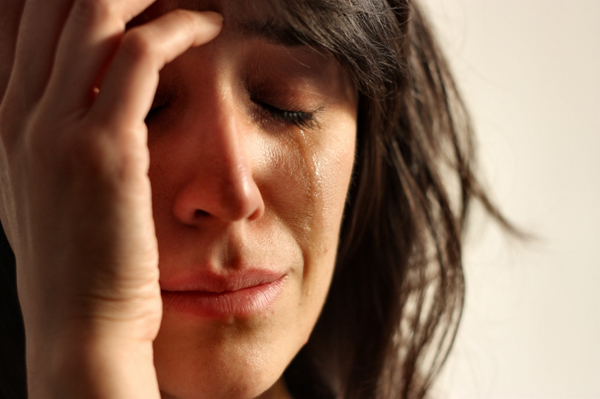 Your man’s brain has shut down, incapable of any logical response as soon as that first wail hit him full on. He can’t even hear your words because he’s so focused on your sobs and your screwed up face that’s wet with misery.

Hate him all you want and demand an answer, but you won’t get anything worthwhile. There is an almost literal shut-off valve in a man’s brain that engages when we lambast him with highly emotionally-charged tears we are blaming him for. You see, it’s one thing if you’re crying because someone else did you wrong. Your mate is then usually eager to step in and fix things for you or even beat up on that someone.

When those sobs are aimed at your mate, as in “You’ve done me wrong,” his brain refuses to compute the substance of what you’re saying. He has hung up on the barrage of blameful wails coming at him. He thinks of himself as a good guy, as your beloved – not the one responsible for all that hysteria.

Cry it out – sans him

So cry out your tears – preferably on your own or with a good friend, dry your eyes, settle yourself down and then approach your sweetheart with your concern. Whatever the issue is, if you come to your man in a calm and rational manner, he’ll be able to hear you, even if he doesn’t like what he’s hearing. Now you’re on your way to a solution. Which is what really mattered in the first place.

How to be “you” without losing “us”
Is he cheating? A private eye shares his secrets
5 Tips to heat up your relationship

2 hrs ago
by Cheryl S. Grant