On Saturday, July 24, the Third Street Promenade in Santa Monica became an open-air yoga party, complete with live music and the city’s top yoga teachers leading classes – a unique and unforgettable experience for expert and novice yogis alike. The event was the sixth in a series of seven one-of-a-kind yoga events held at some of the nation’s most popular venues, made possible by Wanderlust and smartwater, who partnered to create Wanderlust Yoga In The City. 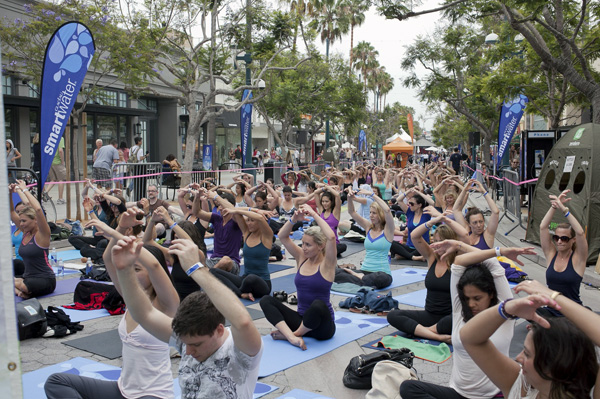 Why yoga in the city? 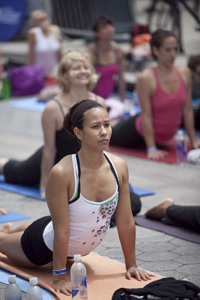 The aim of this exciting series of fun and lively yoga events is to encourage community growth and provide participants with a day full of relaxation and rejuvenation in an imaginative setting. Each of the three classes held during Saturday’s event drew more than 100 participants, and throughout the day a crowd of onlookers eager to see what was going on stopped by to check out all the action. “We created Wanderlust Yoga in the City with smartwater to take the music and yoga phenomenon to a whole new level,” said Jeff Krasno, Wanderlust’s co-founder. “Together we are able to unite the community to support an amazing charity, enjoy some awesome music, sweat out the day’s stress through yoga, and meet like-minded people.”

You might never have thought about practicing your downward dog next to a hundred-plus people (and accompanied by live music), or doing the warrior pose on a pier jutting into the Hudson river in New York, but Wanderlust Yoga in the City is all about doing things differently as a way to bring people together and spread the word about the power of yoga. Earlier events were held at the Civic Space Park in Phoenix, AT&T Arts Center in Dallas, Piedmont Park in Atlanta, the aforementioned Pier 63 in New York, and Grant Park (Butler Field) in Chicago. The seventh and final event will take place August 4 at Space Needle Park in Seattle. 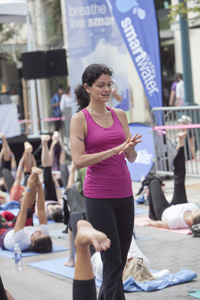 Who wouldn’t want to stretch their way to calm while enjoying the fresh air and sunshine? We love the idea of taking yoga to the next level and practicing amidst like-minded individuals in a fabulous setting with renowned teachers. Saturday’s event was led by Tommy Rosen and Kia Miller, who incorporated chants into their class, Shiva Rea who turned her class into a jam session with a five-piece band at the end, and Hala Khouri ,who focused on internal peace during her session. “Wanderlust and smartwater are doing an incredible job of bringing together community, and nothing unites community like yoga, music and events like this,” said Khouri about the event. “I think it is a vital part of what yoga is about, its community.”

When they weren’t practicing the tree pose, participants had a chance to unwind in the smartwater stress-less lounges, take pictures in the smartwater/Wanderlust photo booth and create their own memory bracelets from beads inspired by smartwater colors.

Along with giving yoga a try in your hometown to reap the mental and physical benefits of this rejuvenating and soothing practice, Wanderlust Yoga In The City and smartwater have also kicked off smartlife, a Facebook application that leads participants through a series of positive goals that benefit their health, the environment and their community. The smartlife application also allows participants to invite friends and family to help complete their goals and to support Wanderlust’s charity partner, Off the Mat, Into The World, in their mission of empowering individuals to transform their lives and their communities through the power of yoga. Om.