We’re in the thick of wedding season – bridesmaid dresses (some better than others), gift registries, bridal showers, bachelorette parties and of course, weddings themselves, which run the gamut from totally amazing to downright awful. One of the things that makes a wedding great is the people you hang out with while you’re there. Conversely, getting stuck at a table full of close-talkers and weirdos can completely ruin the night. To help you better navigate the next few months of nuptials, check out our tips for who to avoid at the next wedding you attend. 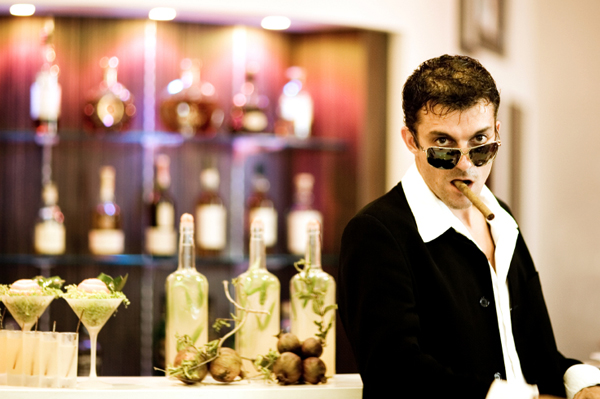 Unfortunately, he’s at every wedding. Somewhere along the way one of his buddies told him that single women are looking to get laid at weddings and he has taken this priceless nugget of advice to heart. Even if you tell him you have a boyfriend or that you have recently joined a convent and taken a vow of celibacy, he will not seem to hear you. He is there every time you turn around and even your biggest eye rolls or sarcastic remarks do not deter him. He will ask you to dance and even if you feel sorry for him, do NOT say yes. He will take this as a sign you are into him and then you won’t be free for the rest of the night no matter how hard you try to shake him. Avoid this person by never being alone. Ever.

There’s at least one at every wedding; the one who takes the idea of an open bar a little too seriously and can’t seem to turn down a drink. You’ll probably see him or her coming a mile away (the staggering and swaying is usually a dead giveaway) and it’s best to stay out of this person’s way. Drunk people can be funny, but the messy drunk at a wedding can be very hard to deal with. They will think of you as a captive audience even though you’re desperately scanning the room for an escape route – and tell you many jokes that wouldn’t even be funny if you were equally as drunk. The only way to avoid the messy drunk is to always be keeping an eye out for them and steer clear.

This is the cousin or aunt that feels somehow slighted by either the bride, groom or worse, their families. Whether the bride’s mother forgot to send Aunt Meredith a Christmas card last year or the groom accidently insulted his cousin’s husband at Thanksgiving, there’s always someone holding a grudge and who came to the wedding only to scowl during the ceremony and sulk through the reception. We suggest avoiding all angry relatives for two reasons. The first being you don’t want to look like you’re “on their side” and secondly, this is supposed to be a happy occasion, not a bitch-fest for angry Aunt Kathy. So don’t let someone’s angry relative put a damper on your night and stay out of their way.

We’re not sure why every wedding seems to have a requisite creepy guy – the one that stares too long, talks too close, gets a little too touchy-feely and doesn’t actually seem to know anyone (did he just sneak in?). But regardless of how or why he’s there, he should be avoided at all costs. Like the can’t-take-a-hint guy, the creepy guy will latch on to anyone who gives him a passing glance and he won’t be easy to shake. To avoid having the creepy guy hovering in your space all night, be as curt as possible with him and don’t be afraid to drag your date onto the dance floor to cut him loose.

Anyone at the outcast table

The outcast table is the one where everyone who isn’t in the top one, two or even three tiers of invitees gets seated. It’s the no-man’s land of tables sometimes described as Siberia. Do not venture over there or you may never be heard from again. The outcasts are usually a motley crew made up of all sorts of bitter, angry relatives, messy drunks and creepy close-talkers. If the outcast table happens to be on the way to the bar or bathroom, try to find an alternate route or if all else fails, take your heels off and sprint.

17 hrs ago
by Morgan Mullings