Remember the riots in Vancouver earlier this summer, when photographer Rich Lam captured a couple lying in the street kissing, of all things? Hey, love knows no bounds, right? But this wasn’t the first time smooching has made the news. Check out these five bizarre stories about lip-locks. 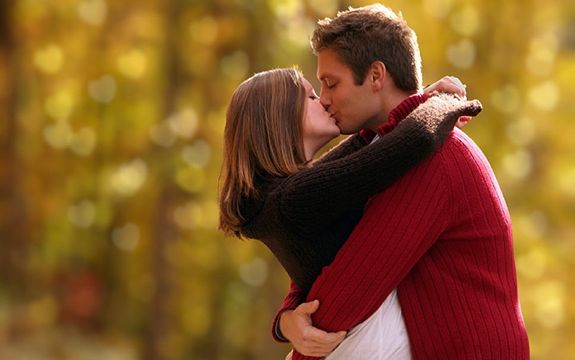 Public displays of affection are a big no-no in Sri Lanka, and to hammer home that point, 200 couples were arrested earlier this month after residents said they were made to feel “embarrassed” by watching other people’s pecks. Not to worry, though: A police spokesman said, “Usually we free them after informing their parents.” 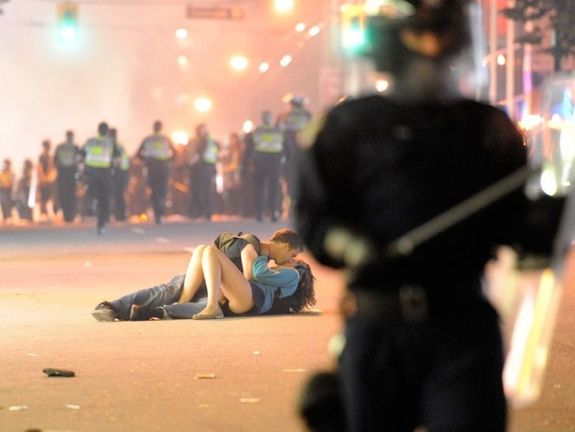 After all hell broke loose in Canada following the Stanley Cup on June 15, a couple was snapped inexplicably smooching on the ground while surrounded by police in riot gear. It’s a transporting photograph without context, but word on the street is that the woman in the photo had been knocked down, and her boyfriend gave her a quick peck to tell her everything would be okay. The camera clicked in that instant.

Kissing is very nice, but we do see the U.K. train bosses’ point in this 2009 situation. Couples regularly pulled up to a certain northern England train station in cars, delaying traffic and causing congestion while lingering to kiss each other good-bye. In response, management put up signs featuring two silhouettes in a near-smooch, with a giant red slash through the image. Said a spokesman for the area’s chamber of commerce: “If they want to linger and say a longer goodbye, they can do that in the ‘kissing zone,’ where there is a limited amount of parking.”

Just four short months ago, a Thai couple kissed for 46 hours, 24 minutes and nine seconds at a Valentine’s Day kiss-a-thon, setting the Guinness Record for longest kiss. The rules stated that the couple’s lips cannot part, and they cannot sit or sleep, but they may drink beverages through a straw while still kissing. They must also continue kissing during monitored bathroom breaks. The competition was organized by a local wax museum; the couple won a diamond ring worth $1,606 and a $3,213 cash prize for their efforts.

If you’ve ever wanted to kiss your internet boyfriend even though he’s miles away, Japanese researchers know how you feel. Last month, a lab at the University of Electro-Communications announced it had developed a “Kiss Transmission Device,” which is “designed to effectively transmit the feeling of a French kiss, swirling tongue and all.” You get one device, and your partner, wherever he or she is, gets another. As you move your tongue, the other device moves in response. In reality, the gadget looks like an electric pencil sharpener with a drinking straw attached, so prepare to do some serious suspending of disbelief if you ever end up using one of these.