We’ve discovered one of Kim Kardashian and Kris Humphries’ wedding registries — you’re not going to believe what they’re asking guests to give them on their wedding day? 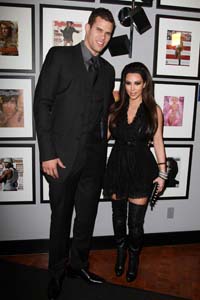 Imagine this scenario: you’re newly engaged and excitedly planning your upcoming wedding. What’s the first thing you do: decide on a ceremony location? Yes. Think about your dress? Of course. Put together a gift registry with tons of tacky gifts? Yes, if you’re Kim Kardashian.

Kardashian and fiancé Kris Humphries wedding registry at Gearys of Beverly Hills reveals a couple of things about the 20.5-carat couple. First, it looks like their official wedding date is October 31, 2011 — only four months until the big day. Second, the $65 million dollar woman and her NBA other half are asking for some ridiculously expensive (and useless) gifts.

What’s on their gift registry?

Oh, and we highly doubt it’s a joke registry — a high-end store like Gearys won’t allow just anyone to make a gift registry at their business.

We think Kardashian and Humphries should just ditch the expensive gift registries (you know they have to have more than one) and instead ask for donations to worthy causes instead of gifts. After all, if you can afford a $2 million engagement ring, then you can afford to buy your own $8,000 vase.

Do you think Kim Kardashian and Kris Humphries should ask for donations instead of gifts?