You should never censor yourself in front of a man, but sometimes it’s better to let some things go unsaid. Here are five things you should avoid saying to your guy — either to avoid a fight, preserve his ego, or save your own sanity. 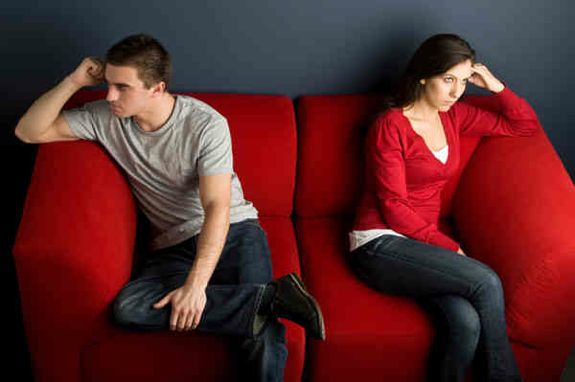 Top 5 phrases that send him to man cave mentality

One thing guys wish that women would do on date night is Just. Freaking. Pick. Something. Don’t worry about whether he’ll balk when you suggest a new foreign flick or roll his eyes if you say you want Japanese food. You’re as much a part of this relationship as he is, and trust us, he’ll love that you took the initiative to suggest something fun.

No one loves man candy like we do, but if you go on and on about what a stud Isaiah Mustafa is, it’ll make your guy retreat into his man cocoon. No one — male or female — can compete with an airbrushed, professionally-gym-trained, designer-clad superstar. Admire your favorite actor’s man parts in private — and save the verbal praise for your guy when he cleans up nice for dinner.

“Does this make me look fat?”

We all know that no one wins if you ask him this.

Unless he’s always able to contort his face into a believable state of revulsion before you get the “t” out in “cute,” he won’t be able to give you an answer that won’t send you into a rage. Listen, there are other hot women in the universe; you can’t really expect him to say that Angelina Jolie “isn’t his type.” Don’t force the issue unless he’s openly gawking at anything female or flirting with the waitress right in front of you. Then it might be time to reassess why you’re in the relationship, not whether you measure up.

“What are you thinking?”

One of our guy friends summed his thoughts on this question nicely: “Trust us: You don’t want to know.” It’s nice to retain some of your relationship’s mystery, right? Also: Sometimes a blank stare is just a blank stare. Fill up your own mental canvas with something scintillating — like Patrick Dempsey wearing nothing but a stethoscope and a smile.