Late Night with Conan O’Brien may be entertaining TV and a good match for a bowl of buttered popcorn or M&Ms, but if you’re regularly staying up late and sleeping in the next day, you could be at risk for putting on the pounds, a new study says. 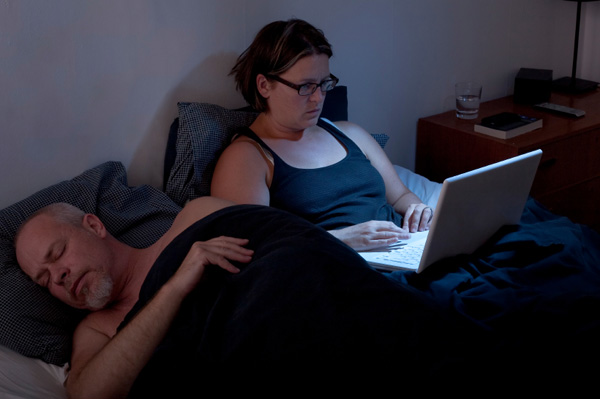 Has your late-night TV viewing or computer time become a habit, triggering hunger pangs at midnight? Chronic night owls set themselves up for poorer food choices and weight gain, researchers at Northwestern University in Chicago have found.

Results of a study published in the journal Obesity and released online this April, show that “late sleepers”— those who regularly stay up late at night and sleep in the next day – tend to eat more, weigh more and eat more low-quality food. The study did not focus on sleep deprivation and the related inability to function at our best. These late sleepers had the same amount of sleep as those who went to bed at a more normal time.

The researchers looked at the habits of 51 adults – 23 of them were late sleepers and 28 were normal sleepers. Participants wore a wrist device to monitor sleep and activity cycles, and recorded their eating and sleep habits in logs for a week.

How late is your bedtime?

Compared to the normal sleepers, the late sleepers consumed 248 more calories a day, twice as much fast food and half as many fruits and vegetables. They also drank more full-calorie soft drinks. Study authors say those extra 248 calories can add up to two pounds per month if they’re not burned by activity – beyond screen watching and clicking the keyboard.

A high BMI is a health risk

The study found that the late sleepers had an average higher body mass index, or BMI, than normal sleepers. That extra weight puts them at risk for health problems such as diabetes and heart disease, now and as they age.

It wasn’t the later breakfast or lunch that was the culprit for the higher BMI of the late sleepers. Calories consumed after dinner were the most problematic. Why? The study authors say that eating when the body expects to be sleeping may disturb our circadian rhythms, throwing our appetite and metabolism out of whack. Basically, when the sun goes down, we’re programmed to be sleeping, not eating.

Researchers say the findings are relevant for people who have trouble losing weight. Going to bed early could prevent overeating at night and the associated weight gain.

More on sleep and healthy eating