Your wedding is days away. The tropical honeymoon is booked, you’ve planned the menu and paid the caterer. The engraved invitations are in the mail and friends and relatives are flying in from around the country. All that’s left to do is put on that fabulous custom-fitted wedding gown and say “I do.” The only problem is, you really want to shout, “No, no, I don’t!” and let your cold feet run away as fast as they can. You’d love to call the wedding off, but something’s stopping you. 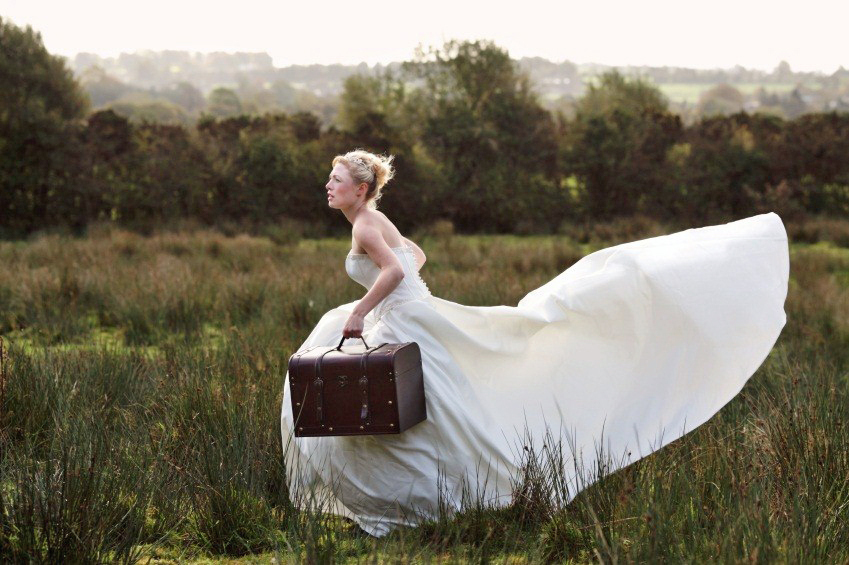 “I am so grateful I was able to somehow find the courage I needed to call off my wedding when I did,” says runaway bride Anne Milford who is also the author of How Not to Marry the Wrong Guy: Is He “the One” or Should You Run. “Everyone has the courage — it’s just that they can’t always tap into it when they really need it. Especially when they are in the midst of planning a huge wedding.”

As Milford’s wedding day drew near, she knew that she and her fiancé were about to make a big mistake. So a few months before she was scheduled to walk down the aisle, she called it off.

“After I did it, I was stunned by the number of women who confessed that they too had wanted to call off their weddings. I couldn’t believe it. And after hearing hundreds of women say ‘I knew I was making a mistake as I was walked down the aisle,’ I decided to write a book about it to help other women make sure they are marrying the right guys for the right reasons. My research revealed that the same five or six reasons stop women from calling off their weddings. The biggest reason is that ‘the party has already been planned,'” Milford says. “They get confused about cancelling a party vs. cancelling a relationship.”

So how does the bride with cold feet overcome this overwhelming reason to walk down the aisle against her better judgment? According to etiquette expert and cofounder of IDoNowIDont.com, Mara Opperman, the most difficult part of calling off a wedding is telling your fiancé. Once you do that, handling the rest is a piece of cake — but not necessarily wedding cake. Opperman breaks the task down into three manageable steps:

3 steps to coping with calling off a wedding

Notify Your Closest Friends and Family

This is a good time to lean on your friends and family for support. Let them focus on cancelling the party—and you can focus on cancelling the relationship. Depending on how far in the future the wedding is—days, hours, minutes—you can have them go through the guest list and make phone calls or send out a simple postcard announcing that the wedding is no longer taking place. No explanation or painful details required.

This includes the florist, church, reception hall, the band or DJ, caterer, flight reservations and hotel reservations, just to name a few. The people who care about you will be more than willing to step up to help you out during this difficult time. Delegate, delegate, delegate. If someone starts to give you trouble or tries to talk you out of it, politely decline their advice and focus on those who are being supportive!

Return all the Gifts

While it’s tempting to keep them, returning all gifts is a must! Include a simple note thanking them for the gift but letting them know the wedding is cancelled. You do NOT need to give an explanation as to why it is cancelled. Think of sending the gifts back as killing two birds with one stone. This is a good way of notifying the rest of your guests that the wedding was called off.

The ring that started it all

There are a few exceptions to this rule, however. “If the ring was given as a gift for your birthday or Valentine ‘s Day, you have a case for keeping it. If it is a family heirloom from the bride’s family, the bride definitely gets to keep it.”

Opperman cautions that there are laws dictating the return of an engagement ring that differ from state to state, so it is important to determine what they are where you live. “Unfortunately, engagement rings can’t just be returned to the jewelry store where they were purchased,” says Opperman. “When my brother was left at the altar and found himself stuck with a ring he no longer wanted and needed, we founded our business—IDoNowIDont.com—to specialize in selling ‘pre-loved’ engagement rings. We wanted to create a safe and trusted environment for buying/selling jewelry, so unlike all other sites, we use a trained independent gemologist to verify all items sold on the site.”

What about the wedding gown? “What happens with the dress is up to the bride,” says Opperman. “Chances are, if the gown was specially ordered, it can’t be returned. However, there are many websites that offer services for selling a wedding gown you never want to see again. It’s not uncommon to see wedding gowns for sale on IDoNowIDont, Craigslist, eBay or in second-hand shops.”

The guests who came to support your relationship

As far as your bridesmaids’ dresses, wedding party tuxedo rentals and guests’ hotel and plane reservations go, reimbursing them for their expenses can be a sensitive subject. “It all depends on your financial situation,” says Opperman. “If you can pick up the tab—that’s great. If not, apologize profusely and try to make it right someday. But don’t let embarrassment about a set of matching dresses and some non-refundable plane tickets push you down the aisle with the wrong guy.”

Why it’s never too late

“Of course it was embarrassing to publicly admit I had made a mistake and call off the wedding,” says Milford, “But it was temporary and I have never regretted my decision. Lean on your friends and family to help you un-plan the wedding. And keep in mind that the financial and emotional toll of a divorce far outweighs the temporary inconvenience of a cancelled wedding. It’s never too late to call it off.”

60 mins ago
by Lauryn Higgins