There are some character flaws that you definitely know mean “stay away” — if the guy has a substance abuse problem, for example, or if he’s verbally abusive. But sometimes the signs of a bad dude can be a little more subtle. Here are a few things to watch out for: 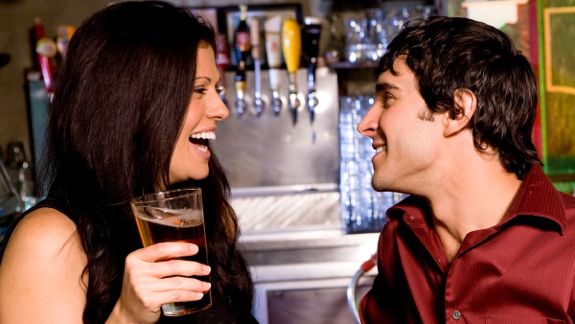 1. he treats People in the service INdustry badly.

The quickest way to tell if a guy is a jerk is how he treats people who are paid to wait on you: a restaurant host or hostess, your waiter or waitress, the movie box office ticket taker — you get the idea. Dock him points if he does any of the following: blames or berates a waiter/waitress for something that isn’t their fault, pulls a “Don’t you know who I am?!” power move, tips poorly on purpose (“That’s coming out of his tip”), or displays general impatience, followed by taking it out on the staff. If you get genuinely bad service, there are gentlemanly ways to handle it: politely asking to speak to the manager, for example. But screaming at the wait staff is a sign that he’ll treat you with equal disrespect if you disappoint him.

We are all for splitting checks or buying a round of post-dinner cocktails if he shelled out for the restaurant — this is 2011, after all. But if the guy you’re seeing never offers to foot the bill (even on the first date), invites you to an über-fancy place you can’t afford but then expects you to pay your way, or conveniently is in the bathroom or has forgotten his wallet when the check comes, it’s highly possible that he’s either a freeloader type or just plain inconsiderate. Inexpensive dates are awesome (hello, a walk in the park and ice cream afterward? yes please!), but making you go to Chez Fáncy when you’re struggling financially yourself is just bad manners.

So, say not only does he talk about all the other women he’s dated, which is incredibly tacky, but he describes most of them as “crazy.” Run while you can, because chances are this guy feels he has no flaws (and therefore played no part in the demise of the relationship). If you do get involved, after the two of you have broken up (and you will break up) he’ll tack you on to the end of that list as another “crazy” chick. Cue the Psycho music. Plus, with a laundry list of exes long enough to go on and on about in detail, chances are this guy is a playboy…or so emotionally stunted he needs to compensate for his insecurities with a constant stream of women. You don’t need that in your life.

Wait… are you guilty of this too?
Learn how to get over your ex. For good. >>

4. He Flirts with other women in front of you.

Every red-blooded straight man is going to find other women attractive, but openly gawking at another woman’s derriere or engaging in witty, flirty banter with your waitress, the coat-check girl, or your best friend is unacceptable. During a date, you should feel like the only woman in the room, and if he’s scanning it for someone better, know that you can do better too.

5. he Booty-calls you instead of making plans.

Ahhh, the 10 p.m. (or 3 a.m.) text: “What are you up to?” or “Want to hang out?” or “R U out?” If you like the guy and get a text like this, your heart will flutter, and you might be tempted to accept, but don’t. If a guy doesn’t make a real date with you — or only wants to meet up when he’s had a few beers with the guys (or another woman), boot him out of your life. You deserve plans made in advance, with you and only you.

Read on about types of guys to avoid >>

And after you’ve kicked these chuckleheads to the curb? You’ll leave yourself open to the possibility of dating a man who not only treats you well, but wouldn’t dream of doing any of the five things listed above. And those good guys are out there.