Have you ever wondered what Barbie would look like if she were real? Galia Slayen did and four years ago the then-university student decided to build a life-size version of the iconic children’s toy. Blond with an ample bust and impossibly tiny waist, Slayen’s mega-Barbie stands 6 feet tall with a 39″ bust, 18″ waist and 33″ hips. She is made of wood, chicken wire and papier mache and was created to raise awareness about eating disorders. 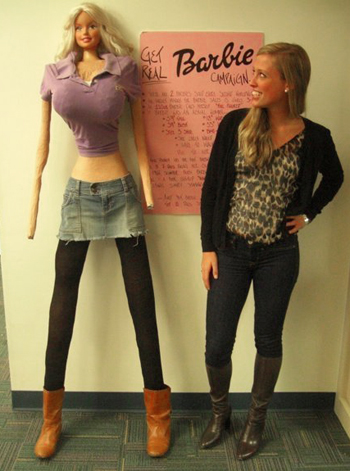 Anyone who has every played with or even seen a Barbie doll knows that real women don’t look like that. Barbie is a fantasy version of the female form, never meant to represent reality. The same could be said about the stick-thin models that parade down runways and flaunt their emaciated forms in magazines. We watch, and although we know we aren’t meant to look like Victoria’s Secret models Marisa Miller, Miranda Kerr, or any other famous waif currently making a living in front of the camera, it’s almost impossible not to make comparisons – and subsequently feel bad about the size of our own (normal) waist, hips and thighs. As if that wasn’t bad enough, Kerr, who had a baby in January, was back in top form posing for a Victoria’s Secret photo shoot a mere three months after giving birth.

How many new moms would feel comfortable baring it all in a bikini three or even six months after having a baby? Our guess is not too many. But models and actresses do it all the time and seem to almost immediately bounce back into red carpet or runway shape. Whether you’re a six-year-old wondering if you’re going to look like Barbie when you grow up or a new mom wondering why you weren’t able to lose every ounce of baby weight within 12 weeks (Miranda Kerr did it, why can’t I?) the impossible standards we’re exposed to do effect us – how can they not? We’re not saying Barbie is responsible for low self-esteem, or that seeing model and celebrity moms in bikinis causes “real” women to be ashamed of every lump and bump – but the impossible ideal we see every day is worth a discussion, which is why Slayen created her life-size Barbie. Not to place blame, but to get people talking about what’s healthy – and what isn’t.

So now what? Love the body you have

Barbie isn’t going anywhere, nor is she gaining weight any time soon. And although there has been a small spate of fuller figured models, like Crystal Renn and Robyn Lawley popping up on runways and in fashion spreads, the standard has been set — and let’s face it, most of us aren’t measuring up. But the point isn’t to try, nor is to let an ultra-skinny ideal wreak havoc on your confidence level or quality of life. Women come in all shapes and sizes and they always will, so lamenting not being blessed with mile-long legs or a waist roughly the size of a Cheerio is simply a poor use of time and energy. Being healthy, appreciating all you do have, and making the most of your life should be your focus – not wasting time wondering why you don’t look like Miranda Kerr.