When he comes over to your place, arm yourself with this cocktail recipe — and prepare to blow his mind. 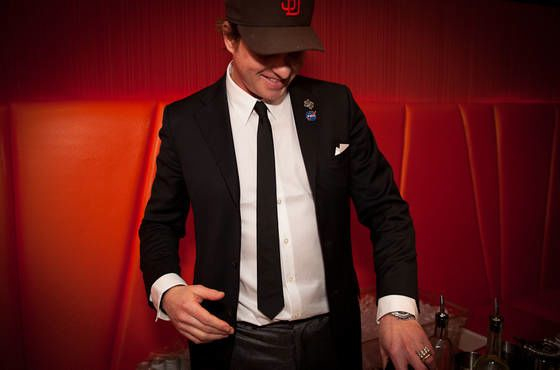 How to make the perfect cocktail for him

He’s over at your apartment for the first time. You look lovely, he looks hot, and a cocktail is in order. What do you make him?

Before we reveal it to you, know that we can’t take full credit. We rang up sexy New York City mixologist Alex Ott (that’s him, above!), co-creator of Mercy hangover preventative beverage, and got his ever-so-male opinion on what drink he’d be impressed with if a woman whipped it up for him — should she be so lucky.

“This cocktail needs to be embedded in his memory, like his childhood memories are,” Ott says. “Like mother’s milk to a baby, this should be the cocktail for a night he’ll never forget. It’s all about flavor combinations: Let the cocktail speak for itself, and surprise him. He should not be able to take it apart. If you do that, you can take advantage of him, manipulate him, and stimulate him in a very good way.”

dash of natural vanilla extract (or a splash of vanilla vodka)

1. First, liquefy that honey, which isn’t as complicated as it sounds: Just combine two parts of honey in a pan with one part hot water (that’s a half-ounce of honey and a quarter if an ounce of water per cocktail), heat it, and stir it. Allow it to cool, then pour the honey into a cocktail shaker filled with ice.

2. In that shaker (you can get a solid one at Crate and Barrel if you don’t have one already), combine the sandalwood, half of the liquefied honey mixture, the natural vanilla extract (or vanilla vodka), the fig jam, the pear juice, and whatever booze you’re using. Shake it vigorously for 10 seconds, then pour it over an ice-filled rocks glass.

3. Garnish your awesome beverage with a lime wheel (not a lime wedge — a full circle; otherwise, he’ll think of a nightclub, Ott says) or a pear slice.

If you want to kick this recipe up a notch, infuse the honey with tobacco leaves. Put a teaspoon of natural tobacco on the honey before you liquefy it, and within 20 seconds, the honey will absorb the flavor.

What to Do and say while you’re Mixing:

Here are a few pro tips on how to banter with your date as you’re making the drink:

“Don’t bombard him with the information on what you’re doing. Keep it a little secret,” Ott says. “But men obviously like smart women. They’re turned on by them, so while you’re making the drink, give him a little bit of trivia. You can say, ‘I’m using vanilla because it’s the most-used spice in the world. Do you know what plant it’s from? Well, the vanilla bean comes from the orchid.’ Tiny little pieces of information that fascinate is how you get someone’s attention in the first place. It’s a very sexy thing.”

And after the cocktails are poured? Enjoy — and wow him with both your intellect and your feminine wiles.

Also: Every single gal’s fridge should contain a few cans of Mercy, which you sip before you go to sleep if you’ve gone a cocktail or two too deep. Stock up!