You’re with a great guy. He’s cute, he treats you like a princess and you can’t get enough of each other. The problem is, he still acts like he’s 17. If your guy spends more time in front of a video game console than he does at work, or thinks reheating pizza is cooking, here are some ways to get him to grow up. 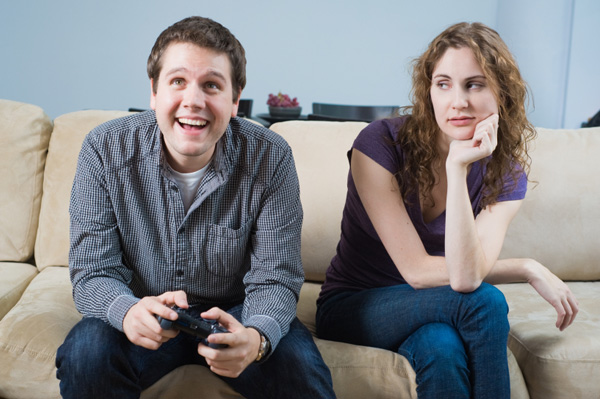 Remember: you’re not his mom.

Some guys are just so loveably inept that you can’t help but do things for them — clean his bathroom (he’s not going to it), restock his basics (otherwise, you won’t eat when you stay over) or remind him to pay his phone bill. But you are his girlfriend, not his caregiver. If he’s old enough to have his own place, he should be capable of everyday tasks. The more you cart his gross towels to the laundromat just so you can take a shower, the more he’ll come to expect it. Don’t let that happen.

Give him some responsibilities.

We’re not suggesting you give him a series of chores; baby steps are fine. Even if you don’t live together, though, he should bear some relationship responsibilities. Start by casually suggesting he take the list you left on his fridge and go shopping. Move on to things like suggesting he figure out what the two of you will have for dinner because you’ll be late getting to his place, or ask him if he’ll walk your dog on nights you have to stay late at work. The point is to give him small but significant tasks to get him used to contributing more than a pretty face to the relationship.

Encourage him to try new things.

If video games and drinking beer are his favorite activities, he needs to branch out. He is no longer 21, even if it seems like he pressed pause on his college years. If he is unresponsive to your suggestions, take a new tack: Get him a pass to a rock-climbing gym or a package of photography classes as a gift. Suggest the two of you try something new together. He may not give up the beer or video games right away, but ideally, he’ll develop some new interests that will help him mature.