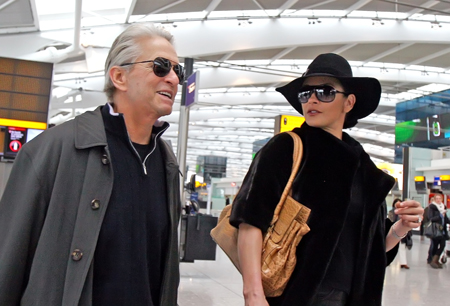 Catherine Zeta-Jones made headlines Wednesday when her rep confirmed that she sought treatment for Bipolar II disorder. The actress, 41, spent much of the two years caring for her ailing husband – but now she’s taking care of herself.

“After dealing with the stress of the past year, Catherine made the decision to check in to a mental health facility for a brief stay to treat her Bipolar II Disorder,” her rep said in a statement. “She’s feeling great and looking forward to starting work this week on her two upcoming films.”

The news shocked Zeta-Jones’ fans – she seemed to have it all together. However, Bipolar disorder is a very common – and treatable – illness with many different symptoms.

The National Center for Biotechnology Information defines Bipolar disorder as “periods of elevated or irritable mood (mania), alternating with periods of depression. The “mood swings” between mania and depression can be very abrupt.”

It can take many forms, according to Today Show doctor Gail Saltz.

“It can look like a very high-functioning person who is just super ‘up,'” Saltz said. Stress can be one factor that contributes to the symptoms.

“I think it’s tremendously brave of her to come forward and I’m delighted that she’s doing that,” Saltz said. “There are many people getting a new diagnosis, and we want them to know they have every hope, if they get treatment, of having wonderfully productive lives.”

Bipolar disorder affects about six million people in the United States, but there’s still a stigma to it. Saltz said she hopes Zeta-Jones’ diagnosis will help bring awareness to it.

“There is a ridiculous stigma in this country about this,” Dr. Nancy Snyderman told the Today Show. “We have to get over it. People get sick, our job as doctors is to get them well.”

14 hrs ago
by Laura Williams