When she became a spokeswoman for the Bayer and March of Dimes collaborative campaign Girlfriends for Folate (GFF), Vanessa Minnillo knew everyone would think she was pregnant. Although she’s happily engaged to hunky boy-band alum Nick Lachey, the TV personality isn’t ready to tackle the role of mommy just yet. But she is ready to raise awareness about the importance of women staying healthy – whether they are trying to conceive, pregnant, or not. 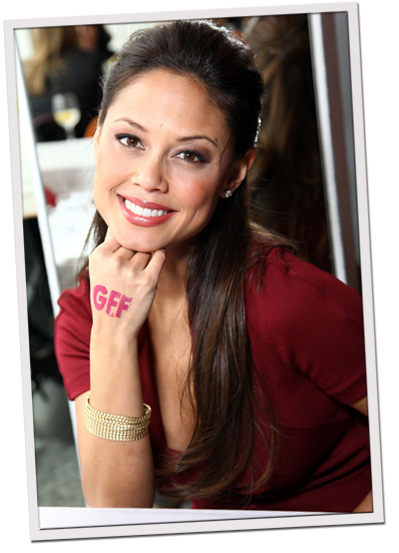 Are you pregnant, Vanessa?

“That’s the first question people ask when you start talking about folate and folic acid,” Minnillo said during a luncheon in New York City. “Even though I can’t wait for that day, I’m excited to be involved with this program because it’s not just for women who want to get pregnant or who are pregnant.”

Folic acid is essential for all women

In fact, health experts recommend that women of reproductive age (18 -45) take a multivitamin or supplement with at least 400 micrograms of folic acid every day. Folate is a soluble B vitamin, which naturally occurs in foods like leafy green vegetables, citrus fruits, and dried beans and peas. Folic acid is the synthetic form of folate found in supplements and enriched carbohydrates including breakfast cereals, breads, pastas, and rice. Folic acid strengthens the body’s regenerative cells and sustains healthy hair, skin and nails. During pregnancy, folate helps prevent neural tube defects in infants.

Be prepared … just in case

“Half the pregnancies in the US are unplanned. That’s a scary statistic,” says Minnillo. “By the time most unplanned pregnancies are detected, your baby is developing. So if something unplanned happens, you need to be prepared and already have [folic acid] in your system.”

Get involved in Girlfriends for Folate (GFF)

To become a GFF, go to the campaign’s Facebook page, click on your region and Bayer will donate $1 to the March of Dimes. To get more involved, you can join a GFF team and raise money. The GFF who raises the most money will win a trip for two to the winning region and walk alongside Minnillo at the March of Dimes March for Babies the weekend of April 30 in New York, Los Angeles, Minneapolis or Houston.

Up next: Girl talk with Vanessa Minnillo >>