The Dukan Diet is the latest European weight loss craze. Now, it’s poised to hit our shores. Here, the experts weigh in on the Dukan Diet — and whether its promises of fast weight loss stand up to scrutiny.

Related story Reddit Loves This Woman’s ‘Energy Diet’ Excuse for a Fertility Shaming MIL & So Do We, TBH 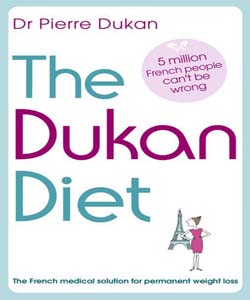 Dr. Pierre Dukan has managed to sell 3.5 million copies of his book, and it’s been translated into 14 different languages. He’s sold the North American rights to a U.S. publisher for $1.3 million dollars, and it’ll soon hit the shelves.

Some critics, however, call the Dukan Diet nothing but an Atkins ripoff.

Says a recent review in the New York Times:

“His own diet’s high-protein, low-fat approach is organized into four phases: attack, cruise, consolidation and stabilization. The first encourages dieters to eat as much as they want of non-fatty, protein-rich foods, including oat bran (a key component) washed down with oceans of water.

“The second stage introduces vegetables, but no fruit; the third brings with it two slices of bread, a serving of cheese and fruit, and two servings of carbohydrates a day, with two weekly ‘celebration’ meals with wine and dessert (the diet is French, after all); and the final stage six days a week of ‘anything goes’ and one day of reversion to strict protein-only stage one — for the rest of your life.”

Kate Middleton is even said to have adapted a Dukaniste lifestyle to prep her body for the royal wedding on April 29.

“As best I can tell, this is classic quick-fix weight-loss hooey. The diet seems to involve cutting out most foods — carbohydrate foods in particular — to lose weight fast,” Katz wrote in a Huffington Post blog. “Then, foods are slowly added back to make the diet liveable. But, to avoid weight regain, you have to keep circling back to the ‘just cut out everything’ phase. Stunning, isn’t it… that not being allowed to eat most foods leads to weight loss?”

Have you tried the Dukan Diet? Weigh in with your thoughts!

What Are the 5 Love Languages? Understanding Them Might Help Your Relationship