Babies are born preferring sweet tastes, and often their introduction to solid food begins with the sweetness of fruits or grains. It’s no wonder that as they grow, most kids love sugary snacks and drinks. An occasional sweet treat probably won’t do any harm, but many children eat far too much sugar each day, setting them up for health problems now and in the future. Read on to learn how sugar is hurting your kids. 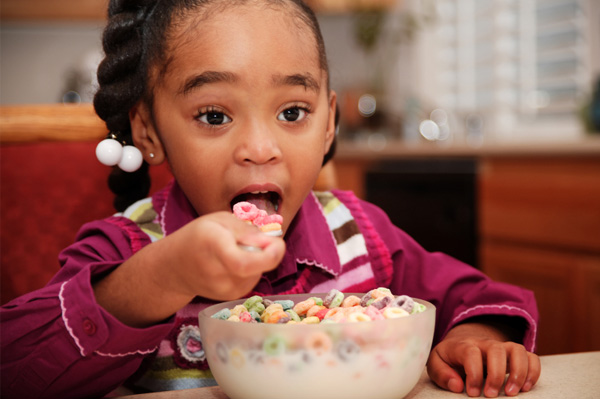 Sugary foods feed the bacteria that cause cavities.

Despite studies that indicate that sugar consumption does not cause hyperactivity in children, sugar does seem to have a powerful effect on kids. When blood sugar levels rise too high, the body releases insulin, which helps it to absorb the sugar into the cells to be used as energy. This can cause blood sugar levels to drop rapidly, leaving children feeling shaky and craving more sweets.

Just like adults, kids gain weight when they take in more calories than they burn. Sugary snacks and drinks are packed with calories and not much else, and eating or drinking too many of them can put on the pounds. In addition, kids who eat too much sugar tend not to eat enough of the healthy foods their bodies need to grow. It’s just too easy to overeat sugary foods — they taste good, often come in large portions and they aren’t filling.

Sugar can lead to diabetes

Sugar doesn’t cause diabetes, but a high-sugar diet can increase the risk of developing Type 2 diabetes or insulin resistance, a pre-diabetic condition, possibly by contributing to obesity and by overworking the pancreas, which produces insulin.

In 2009, citing the evidence of the relationship between the intake of sugars and cardiovascular health, the American Heart Association (AHA) published new guidelines setting limits on the amount of added sugar acceptable for a healthy diet. Depending on their caloric intakes, children should consume no more than three-to-eight teaspoons of added sugar per day. Unfortunately, according to another study done by the AHA, children as young as 1 to 3 years old already consumed about 12 teaspoons of sugar per day, and older children consumed even more than that.

If your child is taking in too much sugar, make some simple changes to his or her diet.

Sweetened beverages, including soft drinks, fruit drinks or fruitades, are the largest source of added sugar in the daily diets of US children, according to the American Academy of Pediatrics. Reduce or eliminate sugary drinks as much as possible.

Sports drinks can be a significant source of hidden sugar in your child’s diet. Even though many sports drinks have less sugar per ounce than soft drinks, kids often consume larger amounts of sports drinks. In general, kids don’t need anything but plain water to drink while participating in sports.

Gradually replace sugary snacks with healthier choices — fruits instead of cookies, 100 percent juice bars (with no added sugar) instead of ice cream, and so on.

Prevent sugar spikes and drops by keeping portions of sugary foods or drinks small, choosing low-sugar or sugar-free snacks and drinks, and encouraging your child to eat food that contains protein and fiber along with his or her sweet treats. Some good protein choices include beans, lean meats or nuts. Whole grains, fruits and veggies are good sources of fiber. Don’t forbid all sweets all the time. This may cause a child to binge when he or she is offered something sugary.