When TV actor Grizz Chapman was diagnosed with kidney disease, a young Arizona man decided to help him out. He donated his kidney last July and now is working to spread a message about the risk of high blood pressure and getting tested for kidney disease. March is National Kidney Month, and here’s our Q&A with kidney donor Ryan Perkins.

SheKnows: The big question is why did you decide to do this for Grizz? 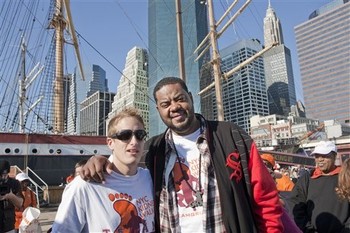 Ryan Perkins: When I decided that I wanted to donate a kidney I was going to do it anonymously, I was never going to meet the recipient and the recipient was never going to know who I was. When I was researching the heck out of kidney donor surgery, I stumbled upon a few blogs and sites naming this man, Grizz Chapman, who was advocating that people should recognize the signs of kidney failure and they should be asking their doctors about their GFR [glomerular filtration rate, a test to measure your level of kidney function and determine your stage of kidney disease]. I thought it was amazing that one person was advocating this cause so much. I discovered that he was on a transplant waiting list.

SK: What has it been like getting to know Grizz?

RP: Grizz is a pretty exceptional person. From the first time we met he has always been so kind and warm with me. And the fact that he is willing to discuss his past kidney disease and experience with a national audience is amazing. He really wants to help make sure no one else has to go through what he did.

RP: I have only caught a few parts of episodes of the show since the surgery. I’m not a huge sit-down-and-watch-TV type of person, so I don’t get a ton of opportunities to watch it.

SK: Not everyone would donate a kidney to a family member, let alone a stranger!

RP: I absolutely think more people should entertain the idea of kidney donation. Living kidney donation is relatively low-risk for the donor. I was in and out of the hospital in a few days, the pain was not very high and life was back to normal within a few weeks. The benefits to the recipient are incredible too. They can come off of dialysis, which is a huge time-suck (three days a week for three to four hours) and physically draining. Also, living kidney donations are likely to last twice as long as their deceased counterparts.

SK: What do you think people should be aware of when it comes to kidney disease?

RP: Kidney disease is life-changing, and preventable, which is why it is so important that people discuss getting their GFR tested with their doctors. High blood pressure is a huge factor that leads to kidney failure, so maintaining it is hugely important. The most surprising thing I found when I was researching the surgery and donation was that even with one kidney I will have almost the same kidney function, as the remaining kidney increases production to pick up the slack of the missing kidney.

Perkins will walk with Chapman during the National Kidney Foundation of Arizona Kidney Walk April 2 at Chase Field in Phoenix. Donate to Team Grizz at www.teamgrizz.com.

More on being a kidney donor

Three living kidney donors and their recipients discuss the feelings experienced throughout the transplant process.

Kidney disease: causes and symptoms
A DASH is all you need for kidney health
What causes kidney stones?

3 hrs ago
by Cam Zhang

4 hrs ago
by Hannah Rimm

4 hrs ago
by Nadine Avola

5 hrs ago
by Michele Borboa MS