Blair River, the nearly 600 lb. spokesmodel for the Heart Attack Grill, passed away this week. Read on to find out what caused his tragic death. 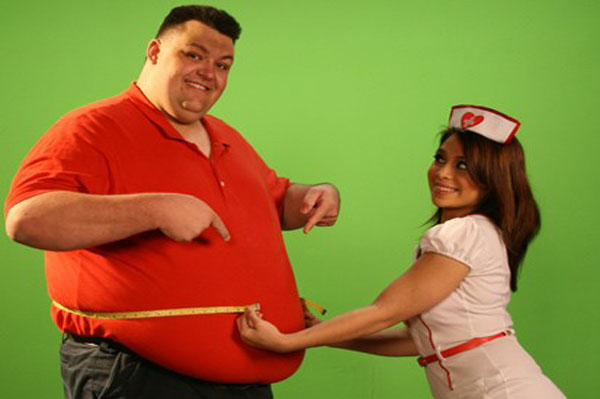 The 575 lb. ‘spokesmodel’ for Chandler, Ariz-based restaurant Heart Attack Grill passed away earlier this week – but it’s not for what you think.

Blair River, 29, was featured in tongue-in-cheek ads for the restaurant that offers thick, fatty burgers, lard-cooked fries and free meals for customers over 350 lbs. However, his death this week is believed to be due to pneumonia. River was reportedly sick with the flu before his death.

“Cynical people might think this (River’s death) is funny,” Heart Attack Grill owner Jon Basso said. “But people who knew him are crying their eyes out. There is a lot of mourning going on around here. You couldn’t have found a better person.”

The 6’8″ River was also a state-champion heavyweight wrestler in 1999, according to the Arizona Republic.

“He was a nice guy, very energetic and full of life,” said Alex Arreola, a restaurant waitress. “He was always talking about his daughter and he always seemed to know the right thing to say to people.”

Basso also said that he would have hired River even if he were thin.

“Even if he was skinny we would have given him the job,” Basso said. “We would have just put a fat suit on him. He just had personality.”

The news of his death is really, really sad – he was so young. We do wonder, however, if his body would have been able to fight off the sickness if he didn’t have so much extra weight.

“We’re like a family here and he was part of our family,” Arreola said. “He will be missed. He’ll definitely be missed.”

More on diet and fitness

Foods for good moods and energy
3 Tips for sneaking fiber into your diet
Barre workout: Get lean and chiseled

20 hrs ago
by Lauryn Higgins