Jillian Harris is best known for her stint on The Bachelorette. The fun-loving, down-to-earth Vancouver native found love on the ABC reality dating show with Chicago businessman Ed Swiderski. Although that relationship fizzled, Harris has started a new chapter in her life as a co-host on ABC’s Extreme Makeover: Home Edition. The interior designer chatted with SheKnows about her days as “The Bachelorette” and how she stays healthy, fit and stress-free. 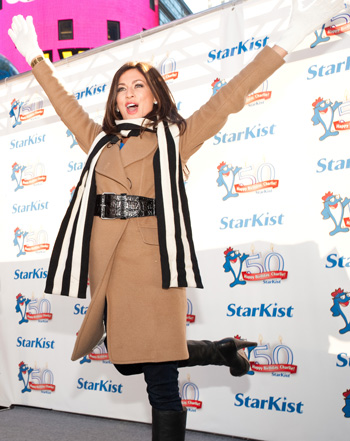 Q&A with The Bachelorette Jillian Harris

During a recent visit to New York City to celebrate StarKist icon Charlie the Tuna’s 50th birthday, the interior designer chatted with SheKnows about her days as “The Bachelorette” and how she stays healthy, fit and stress-free.

SheKnows: You seem pretty active and fit. How do you keep in shape?

Jillian Harris: As women, we put a lot of pressure on ourselves to be married, to be fit and be pretty, and it feels like it’s never good enough. So for me when it comes to diet, I don’t deny myself anything. If I want a burger, I have a burger. But in the back of my mind, I know I want to be healthy and a fun mom in my 40s and around for my grandchildren.

That’s what’s great about this StarKist 50th birthday celebration for [Charlie]; it promotes putting those superfoods like tuna, blueberries, almonds and broccoli back into your diet. [My motto is] everything is good in moderation. The only thing I’m extreme about is my job at Extreme Makeover: Home Edition. So don’t starve yourself; just nourish yourself.

SheKnows: What is your workout secret?

Jillian Harris: When it comes to working out, I’m probably lucky because I move around a lot and I’m hyper. So my body metabolizes fat really quickly. But when I go to the gym, I do circuit training. When I work out, my skin looks better, my stress levels are down, and I feel better about myself. I think yoga is great, but I like cardio. I like to bust a move on the treadmill.

SheKnows: How do you de-stress?

Jillian Harris: I like to be around my friends and family. This year has been so great already and I don’t get stressed out by too much lately. I’ve had such a crazy two years and I’ve learned you never know what’s going to happen. But life sorts itself out. You have to leave it in the hands of whatever [you believe in]. I’ve taken a lot of pressure off myself and just want to have fun. And I try to touch other people’s lives the way I’ve been touched on Extreme Makeover: Home Edition.

SheKnows: Is it really possible to find love on a reality show?

Jillian Harris: Oh yeah, I think you can. I found love. As for the reasons why [the relationship with former fiancé Ed Swiderski] didn’t work out, I don’t know. Maybe it was the show or maybe it just naturally didn’t work. But I can see why I chose him.

The biggest thing is that whether you find love on a reality show, online, at a bar or the library, you have to make the relationship a priority and work at it. We work hard on every other aspect of our lives and we need to work just as hard on our relationships and keep ourselves in check. It’s possible to fall in love anywhere and unfortunately, it’s just as easy to fall out of love or for that relationship to fail.

SheKnows: If you could do it over again, would you do The Bachelorette?

Jillian Harris: If I could rewind time, [yes,] in a heartbeat. But would I do it a second time? No — for no other reason than it’s somebody else’s turn. I don’t need to fill that “Bachelorette” spot again. I’ve got Charlie the Tuna. I don’t know if you’ve noticed, but he doesn’t talk much [she jokes]. At 50 he looks great, he’s healthy, and he’s wise.

3 hrs ago
by Katie Smith