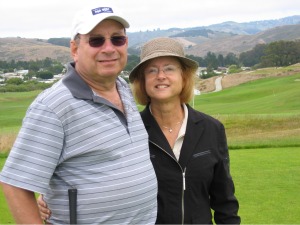 About Marilyn and Mike

Mike and I met in college, and have been married 41 years. We are both professionals — Mike a CPA and finance director, and me a marketing executive, now an executive recruiter. We have two grown sons. Family is very important to both of us.

On February 28, 2009, Mike’s doctor’s office called to tell him he had prostate cancer. At the time we were not all that concerned as Mike’s father and my favorite uncle had been treated for prostate cancer and the results of their treatments were fine. Mike had been getting PSA tests for awhile, so we knew that there could be a problem.

He read everything he could on the Internet, joined blog groups about prostate cancer and learned about the Accuray CyberKnife treatment. The company is not far where we live, so we were able to meet with them and learn more about this treatment. Then we discovered that our insurance provider, Anthem Blue Cross, would not cover the treatment, even though it was “cheaper, faster, better.”

In the end, Mike worked tirelessly for three months to build a case for the insurance company and won. He was successfully treated with CyberKnife in June 2009.

As for words of encouragement, I have two close friends who died of cancer within nine months of each other — one with lung cancer and one with brain cancer — and not a day goes by that I don’t remember them and their fight. I find encouragement in knowing that we are still here fighting these battles.

In addition, support from family and friends are critical. Let them be there for you. Don’t be shy in asking for help. Most people are caring and will gladly help in any way they can.