If you’ve avoided yoga because you aren’t an OM-chanting pretzel poser and the hour-long traditional yoga classes don’t fit into your busy schedule, it’s time to try a modern form of yoga that is more practical than spiritual. No OM Yoga is a yoga practice that meets the yoga needs of today’s women and fits into the busy lives we lead. Here’s why you should integrate this form of no-nonsense yoga into your fitness routine. 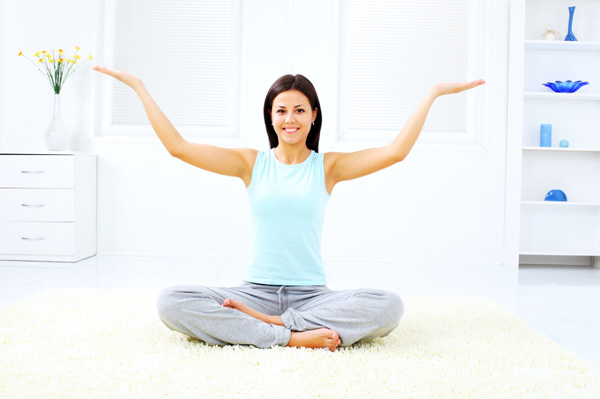 Countless schools and types of yoga involving physical and mental discipline go back to time immemorial in India, where they’re associated with various Eastern religions. In recent decades, all kinds of yoga practices have taken root in the West. And while yoga here is generally thought of as a form of exercise, it has also generally contained some religious or spiritual aspects: The chanting of “om,” for example.

A different type of yoga

A modern form of yoga is breaking free of its past to serve a larger audience. This new approach to the ancient yoga practice might best be described as “No OM Yoga,” and it’s rapidly gaining popularity for today’s on-the-go women. No OM Yoga welcomes newcomers rather than intimidates them. It doesn’t impose ancient (often unintelligible) terminology and spiritual entanglements on practitioners. It’s a practical approach that eliminates the many reasons people avoid yoga — and lose out on its many benefits.

No OM Yoga strips away what’s not essential about yoga to get to what it is. Those benefits include increased strength and flexibility, injury prevention and rehabilitation, improved posture and muscle tone, and just looking and feeling better, younger and even taller. They also include helping lower stress and bringing calm to our topsy-turvy lives. But while these benefits are widely known, many women still haven’t gotten around to practicing yoga.

No OM Yoga offers welcome alternatives to the off-putting aspects of many traditional yoga classes.

Despite the pretzel posers who turn up in so many yoga classes, you don’t have to tie yourself in knots to benefit from yoga. Nor do you have to understand Sanskrit terms. No OM Yoga eighty-sixes both complicated poses and terminology — it’s easy to understand and easy to adjust to your level of fitness and experience. No OM Yoga has no room for the “chosen few” attitude found in many yoga studios. Instead, it’s all about a supportive, friendly environment.

The chanting and “religious” aspects of yoga

As “No OM” suggests, there’s no chanting in No OM Yoga. Where traditional yoga classes often include chanting in Sanskrit, in No OM Yoga classes you’ll never be asked to OM along. You also won’t be trapped listening to someone preach at you. Rather, the No OM yoga instructor philosophy is: “I’m not your guru, you are.” No OM Yoga isn’t about indoctrinating you into a yoga “cult” nor insisting you meditate on the top of a mountain. It’s simply about helping normal people reap the amazing physical and mental benefits of yoga.

“I don’t have enough time,” is a big reason women give for not taking yoga. No OM classes are often shorter than traditional yoga classes, making them easier to fit into today’s busy schedules. Some No OM Yoga workouts are only 10- to 15-minutes long — designed for women on the go — and these yoga workouts can be done just about anywhere you can roll out a yoga mat.

No OM Yoga can renew and energize you

Given our busy lives, the last thing many women feel like doing with a free moment is working out. The truth is, yoga energizes you, physically and mentally. No OM Yoga goes the extra mile, eliminating tiresome aspects of many traditional yoga classes in favor of a fun environment where popular music replaces droning “yoga music” and a no-judgement attitude replaces, well, attitude.

Simply put, No OM Yoga is no-nonsense yoga you’ll look forward to doing rather than see as a chore. It’s all about you being who you are and not who your yoga teacher wants you to be. It’s about doing the things you want to do — leading the life you want to lead, playing the sports you want to play — with more strength, flexibility, energy and enthusiasm than you ever thought possible.