Dozens and dozens of celebrities were wed in 2010, here are just some of the celebrity wedding highlights of the year. 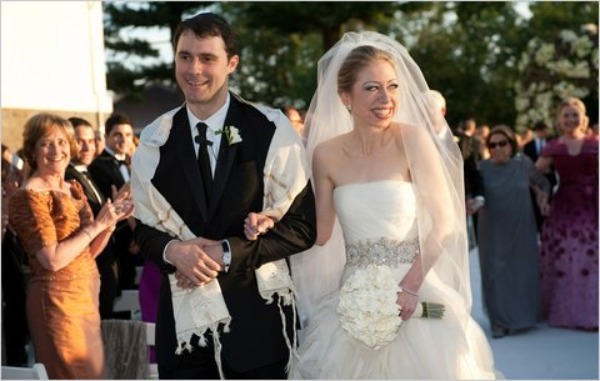 Bonding over a love for comics, Seth Green landed model/actress Clare Grant. The two were married at George Lucas’ Skywalker Ranch in May. They had a quirky, fun wedding and reception that matched their personalities.

Singer Alanis Morissette and her rapping beau Mario Treadway (AKA Souleye) wanted to keep things private for their wedding in May. The duo was married in Alanis’s home, free of the paparazzi. They kept the secret for over two weeks before announcing it on Twitter.

Also in May, Jane Lynch of Glee married her girlfriend, psychologist Lara Embry in an afternoon affair in Massachusetts. The couple had a beautiful outdoor ceremony with just 21 guests.

In one of the more casual celebrity weddings of the year, Calista Flockhart and Harrison Ford were married in June at the New Mexico governor’s private mansion in Santa Fe. Harrison, of course wore jeans while his beautiful wife donned a sundress.

One of the sexiest women alive officially went off the market in June. Megan Fox and longtime, on and off boyfriend Brian Austin Green were married in a secret, intimate ceremony in Hawaii with only a half dozen people in attendance.

Hockey player Mike Fisher married Carrie Underwood in a evening ceremony by the lake. The wedding reportedly cost a half million dollars — which was less than Carrie’s $800,000 engagement ring.

One of the cutest couple in Hollywood tied the knot in Como, Italy in July. Emily Blunt and John Krasinski (Jim from The Office) had a quiet, private outdoor ceremony at the Villa d’Este.

Another adorable couple, Miranda Kerr and Orlando Bloom were also wed in July, about a month after they were engaged. Their secret ceremony reportedly took place in Los Angeles. Miranda is expecting their child in January.

In another July wedding, former Fist Daughter Chelsea Clinton and Marc Mezvinsky had an elaborate wedding with a price tag of over $3 million. Over 400 guests joined the couple for their special day at the John Jacob Astor IV mansion in New York’s Hudson Valley.

In a fairy tale affair in India in October, the party lasted six days leading up to the wedding ceremony of Katy Perry and Russell Brand. The ceremony featured camels, horses, elephants and much more.

This longtime couple finally tied the knot in December in a beautiful winter wedding that included their adorable daughter, Harlow, as their flower girl. Approximately 130 guests (including an elephant) joined Nicole Richie and Joel Madden on their wedding day.

4 hrs ago
by Ashley Papa