Nowadays it’s not uncommon for the woman in the relationship to make more than the man. And no matter how far we have come, issues and problems can result from this situation. 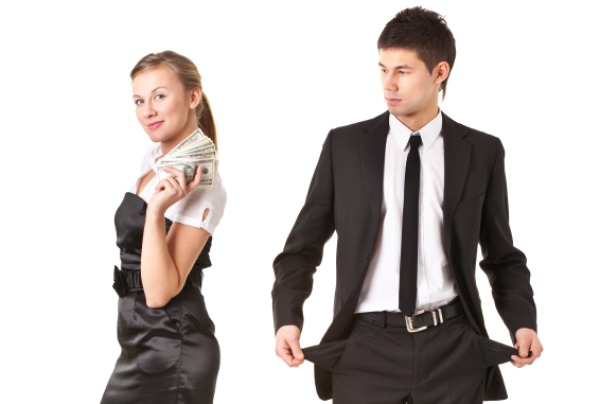 HerWay.com‘s dating and relationship expert, DeAnna Lorraine offers insight into this scenario and provides tips on how you can help your partner get over any issues he may have if you make more money.

When a woman makes more money than a man, it can result in the man feeling emasculated and insecure (and therefore, unhappy and unfulfilled in the relationship). A man’s self-worth and value is rested almost entirely on his ability to provide for his woman and family, and be successful in his career. So when a woman makes more than a man, he feels he isn’t as valuable and needed to his woman. He may then feel unhappy in the relationship and begin to look elsewhere toward a relationship where he can feel more like the provider and more needed, as a man.

Another issue that can arise is the woman may begin to feel resentful toward the man if she is always having to pay for things, or is paying for the majority of things. In this case, the woman may belittle the man by insisting on paying for everything, and the relationship can evolve to become more like a mother-child relationship than two lovers.

A loss of attraction and respect can also occur, where the woman may lose respect over time if the man is never contributing or paying for things due to his lower income. And he may lose attraction for her because by her having a more traditionally masculine role, he essentially begins feeling like he is dating a man and not a feminine woman.

How to help him deal with it

Don’t make it an issue!

If a woman is interested in a man, she’s already interested — she already knows he’s making less than her and she’s fine with it. But if the man keeps bringing it up or turns it into an issue, then it becomes one. So, both parties should avoid making the subject an issue. It is what it is.

Discuss expenses, travel, future goals, and ‘extras’ equally — regardless of who was paying for it. As a woman, make sure he’s included in financial discussions, handling taxes and bills, and dreaming up vacations, etc. This makes him feel included and significant in the relationship.

Don’t use it against him

NEVER make him feel small or inadequate about making less than you, and never use it against him. He will become unhappy very fast!

Don’t give him an allowance

Don’t give him an allowance or make him have to ask you for money frequently. Have three accounts: A “Yours,” a “Mine,” and “Shared” account. That will still give him financial independence for whatever he wants to do with his own money, and the shared account is for things like bills, groceries, dinners, etc. With a monthly limit on the shared account, both of you can take money as needed. He can use it as if it were his own so he doesn’t have to feel embarrassed or child-like continuously asking you for cash.

Let him at least pay for the smaller things, or whatever he can afford. If he wants to pick up the tab for dinners or groceries, let him. If you insist on paying for everything just merely because you make more income, he will always feel inadequate and small.

Allow him to handle the bills

If he is good at handling the bills and taxes, let him — even if it’s with your money. He will still feel more useful and masculine in doing so.

Recognize the things that he’s good at — maybe fixing things around the house, creating the budget, or maybe he is passionate about his job. Let him know how much you appreciate those qualities and things he does. Tell him that the things he is bringing to the relationship are just as valuable as what you are bringing. This will stroke his ego and make him feel needed. If he’s home with the kids, tell him how you believe it’s helping the family as a unit.

Let him be the man in other areas

Allow him to give advice, fix things around the house, kill some bugs, change your oil, open doors for you and protect you. If you shun his masculine efforts in all areas, he’ll feel like he has nothing to offer you. Make him feel like a man as you take a more traditional feminine role in areas other than money.

More about money and love