If your daughter has fallen under the curse of being the perpetual “Good Girl,” being good may not be good for her self-image and emotional well-being. Here’s how moms can help their daughters not only be themselves but also help boost their self-esteem and encourage them to grow into self-confident women. 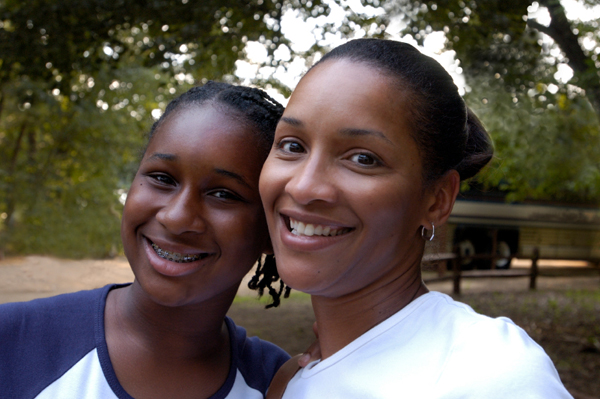 Dork out with your daughter

Girls of all ages say they’re most in touch with their true selves when they’re being silly, crazy, loud or goofy. By late elementary school, your daughter is likely to hear peers deem silliness “lame” or “immature”; these girls perceive that “acting older” will make them cooler. When girls shut down silliness, they restrain themselves physically. They begin disconnecting from who they are in order to try to be something they’re not. Step in to fill the void and keep silliness alive. Whether it’s singing in the car at the top of your lungs, dancing like no one’s watching in the kitchen or making ridiculous faces and noises, just do it: Let go of the “be perfect” rules and dork out together. There is no more powerful antidote to the pressure to be perfect than a mom who can burp the alphabet.

Teach your daughter to say no and speak up

Your daughter lives in a world that tells her Good Girls are nice 24/7, no exceptions. In a peer culture that avoids conflict, girls don’t get permission or learn skills to say no. These are crucial muscles you want your daughter to have: the ability not just to know what she’s feeling, but to act on it. Think about the last time your daughter heard you speak up and challenge something or someone. Show her how it’s done — assertively and with respect. Warning: Expect embarrassment. I used to want to throw myself under a bus when my mom sent cold French fries back to a restaurant kitchen for re-heating. Fifteen years later, I sent them back myself — and thanked my mom for the permission she gave me.

Moms, get comfortable with your own limits

Good Girls are expected to be flawless: not a hair out of place or math problem wrong. All that pressure can make a girl terrified of mistakes. The next time you screw up, gauge your reaction and consider the example it sets. Find your sense of humor if you can. Barring that, avoid labeling yourself in front of her (“I’m such an idiot”) or making sweeping predictive statements (“I’ll never get this right”). Point out the silver lining of your mistakes (there’s always at least one). Show her errors aren’t the end of the world. Bonus point: Take healthy risks with or in front of her. Anxious about that first spinning class? Worried about that next leap at work? Take it, and tell her about your nerves. Even if it doesn’t pan out, she is watching a mother who’s willing to fail. No one makes it big by playing it safe, and your example will give her permission to take the risks that yield the most exhilarating rewards.

The Perfect Mom culture is suffocating. It suggests that truly good mothers put everyone’s needs before their own. But the rules of being a Perfect Mom are diametrically opposed to the example most women want to set for their daughters. Laurie’s 12-year-old confronted her. “Mom,” she said, “why don’t you go to that dance class you want to take? All you do is take care of us.” Laurie was horrified, thinking “What kind of example was I setting? That my life is all about everyone else?” She made it a point to take the class — even if it meant not being there to drive every carpool shift or help with homework. Letting your children down isn’t easy, but the long-term, big-picture message they get is: I’ve got a mother who takes care of herself and leads a balanced life. In other words, one of the best gifts you can give your daughter is to do something for yourself.

Talk to your daughter with emotion words

Myth: Just because girls have lots of feelings means they’re really good at knowing and expressing them. Truth: Not only do girls often struggle to know what they’re feeling, many describe feelings as nuisances that make you look lame or weak, just as boys do! Girls who communicate their feelings let others know what they need and are less likely to lose control over their behavior. What you can do: Use emotion words in front of your daughter to model your comfort and build her own emotional vocabulary. Say how you’re feeling (remembering to leave out the stuff daughters shouldn’t hear, like “I am feeling really angry at your father.”). Ask her how she’s feeling. Instead of asking, “How was your day?” try “How are you feeling?” If she says “Fine,” say, “Fine-happy? Fine-worried? Fine-excited?” Knowing and saying how you feel is a powerful channel to our true selves, not to mention successful relationships.

More on girls and self-esteem

This short film shows the way a girl’s self-esteem can be influenced by friends and parents.