Chilean miner Edison Pena competed in the NYC marathon on Sunday Nov. 7. The running enthusiast even managed to beat his own goal — read on to check out what he’s up to next! 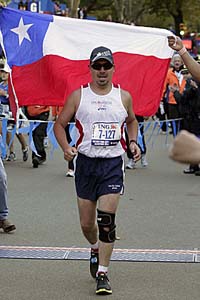 The streets of New York City are a far cry from the dark tunnels of a Chilean mine, but Edison Pena took on (and triumphed) over both challenges by successfully completing in the NYC marathon on Sunday Nov. 7.

Pena fought off fatigue and a knee injury to complete the NYC marathon with a time of 05:40:51. The formerly-trapped miner completed the 26 miles ahead of own goal — he wanted to complete the course in six hours. That he did — he crossed the finish line draped in a Chilean flag with Elvis songs (his favorite artist) playing in the background.

“In this marathon I struggled,” he told the Associated Press. “I struggled with myself, I struggled with my own pain, but I made it to the finish line. I want to motivate other people to also find the courage and strength to transcend their own pain.”

Competing in the NYC marathon was Pena’s way of closing the door on his experience in the Chilean mine where he and 32 others were trapped for two months. He dealt with the experience by running in the mine’s intricate tunnels each day. Pena said the six to seven miles of running helped him deal with the stress of the experience.

Besides being the only Chilean miner in the NYC marathon, Pena started off his experience in the U.S. by appearing on the Late Show with David Letterman last week. Now, he’s off to visit his idol’s home, Graceland. After that? He’s going to Disneyland.

Such an inspiration — he deserves all of his new experiences.