Katy Perry’s wedding dress details were finally released, and we have all the details. Did she don a traditional Indian outfit or something more fit for a pop princess? 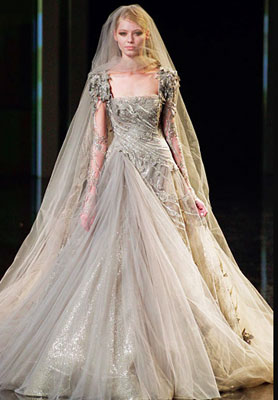 Katy Perry’s wedding dress was fit for a princess — a pop princess.

All about the shoes

Perry chose two pairs of shoes for her wedding celebration, according to People Magazine. For the ceremony, Perry wore custom-made, one-of-a-kind beaded satin heels worth $7,000.

She then kicked off her heels after the vows and donned a pair of sparkly flat sandals for wedding reception dancing, according to insiders.

Various gossip writers reported that Perry and Brand would don traditional Indian outfits for their ceremony. We now know that’s not the case — but the couple did incorporate a few Indian touches into the ceremony at the Aman-i-Khas resort in northern India.

The couple reportedly entered the ceremony on elephants and wore traditional henna tattoos on their hands. Perry also wore a nath, a traditional gold nose ring with a chain that stretched from her nose to her ear.

Off to the honeymoon

Just when we thought the wacky couple couldn’t top their wedding, they jetted off to an exotic honeymoon. The couple was spotted boarding a plane for their honeymoon in the Maldives, according to reports.

The rumor mill is running overtime: Did they sell their photos to the UK magazine Hello or not?

The couple maintains that they wanted to keep the ceremony private, but multiple sources say they sold the photos for millions. We hope they did, because we want to get a look at Katy Perry’s wedding dress with our own eyes!