The evidence is everywhere: Soccer has quickly become one of America’s favorite pastimes. From the fancy footwork to its cardio kick, there are dozens of reasons to join one of the recreational leagues in your city. 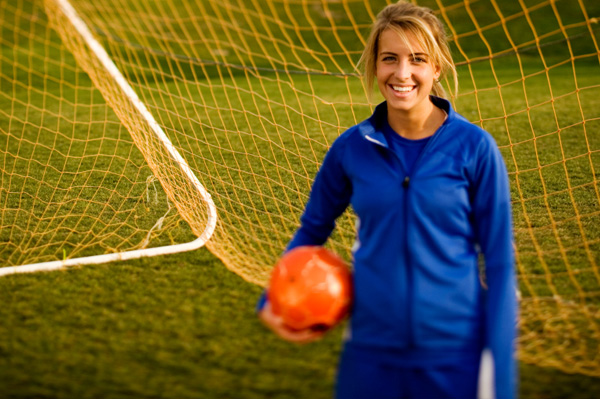 Governed by FIFA, the Fédération Internationale de Football Association, soccer’s origins lie in mid-19th century Britain. The rules were developed by the then-leading Football Association in 1863, as an effort to distinguish this type of football from other, related sports (for example, rugby). The word “soccer” was first linked to the sport in the 1880s.

The gist of the game

Soccer is played on a rectangular field of grass or artificial turf, with a goal in the middle of each of the short ends and sidelines marking the field of play. The object of the game is to score by driving the ball into the opposing team’s net. The goalkeepers are the only players allowed to touch the ball with their hands or arms (unless a player is throwing the ball back into play), while the field players typically use their feet to kick the ball into position. The ball can also controlled with “headers” (using the head) or using the torso.

Each team consists of 11 players (including the goalie) who are on the field at any one time. Players can be substituted into and out of the game whenever there is a stop in play. For example, a stop in play occurs when the ball has been kicked out of bounds and needs to be returned; this is done in the form of a thrown-in, goal kick or corner kick.

Perhaps part of the appeal of soccer is how inexpensive it is to play. (It’s often referred to as the global sport because even less-affluent countries play it regularly.) All you really need is a pair of shorts, a shirt, knee-high soccer socks, shin pads and soccer cleats. It’s generally forbidden to wear any type of headgear, jewelery or accessories on the field (even metallic hair clips), in an effort to prevent injury.

The soccer workout you get

Every soccer match usually lasts 90 minutes and includes a 10- to 15-minute break, called halftime. During that match, a 140-pound woman, even if she’s playing casually, will burn upwards of 650 calories. What’s more, she’ll be working on her agility (moving around with the ball), coordination (controlling the ball), cardiovascular health, muscle strength and bone density.

And every major muscle group gets worked over the course of a game. From the legs to the glutes, to core muscles to the arms, no muscle is left untouched. Which makes it even more important to fuel yourself for play: Be sure to drink lots of water before, during and after a game to stay hydrated and have a carb/protein-rich snack at the ready for post-game feasting.

In this video you get a 20-minute workout that you can do at home. All you need is you and your soccer ball!

More on women and sports