ESPN challenged average American woman Kathryn Bertine – writer, waitress and former pro figure skater – to train in nine sports on a two-year quest to qualify for the 2008 Olympics in Beijing. She didn’t qualify, but now she’s a competitive cyclist for St. Kitts and Nevis, and her new book, As Good as Gold, documents her heroic efforts. SheKnows talked to Bertine about her “Olympic mettle.” 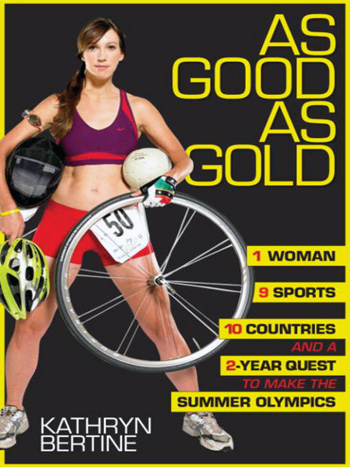 Getting the call to qualify for the Olympics

SheKnows: What was your life like at the time you got the call from ESPN to be an “off the street” athlete exploring what it takes to qualify for the Olympics?

Kathryn Bertine: Pretty crazy. I was trying to fulfill my dreams as a new pro triathlete but my personal life was falling apart. I’d just cancelled my wedding, moved and was unemployed. Bleak, to say the least!

SheKnows: Did you choose the nine sports you wanted to compete in?

Kathryn Bertine: I did choose the sports, and wanted to see what some of the “lesser-known” sports were like. Team handball and luge were the most unusual. Many ESPN readers suggested I try the luge, even though it isn’t a summer sport, so I went ahead and did that and, yes, it was quite scary in a thrilling sort of way.

SheKnows: Didn’t training for all nine sports put you at a disadvantage to qualify?

Kathryn Bertine: I didn’t do all nine sports concurrently. It was a trial-and-error basis until I found the one that suited me best, which was road cycling, and I’m still in love with it.

SheKnows: Was the training anything like what you did as a figure skater?

Kathryn Bertine: After 11 years of being both a professional and amateur singles figure skater, and rising through the most competitive ranks, I knew what it took to train seriously. In that sense, trying to get to the Olympics was everything I expected it to be — hard.

SheKnows: Did you ever think you would qualify to compete in the Olympic Games?

Kathryn Bertine: Yes, of course. You have to believe in yourself before you ever commit to a goal.

SheKnows: Did you find a country to sponsor you?

Kathrine Bertine: The nation of St. Kitts and Nevis in the Caribbean granted me dual citizenship so I could attempt to gain their country an Olympic berth. In return, I am helping them build a junior cycling program within their nation. It is personally so fulfilling to be able to give back.

Set goals and go for the gold

SheKnows: What does it take to be an Olympic contender?

Kathryn Bertine: Choosing to shoot for your goals means just that. You make a choice, and you accept what might be challenging. It is all very exhilarating. Training is hard but rewarding, and food choices for an endurance athlete are great: Eat well, and lots of it!

SheKnows: What did you learn about yourself from the experience?

Kathryn Bertine: That the experience of chasing a dream far outweighs the actual results of whether or not it is achieved.

Starting is the hardest part

SheKnows: What message do you want to pass along to women who want to get fit?

Kathryn Bertine: Setting goals and taking that first step always delivers results — often more results than you can imagine. The hardest part is getting going, but once you cross that barrier, you’re off and running.

So You Want to Be an Olympian

A clip from ESPN’s So You Want to Be an Olympian, starring Kathryn Bertine.