Kerri Dowd, a high school teacher and mother of two from Washington, never expected to have breast cancer. She maintained healthy habits, had no family history of the disease and was only in her 40s. Then she found a lump. Here’s her story on surviving breast cancer. 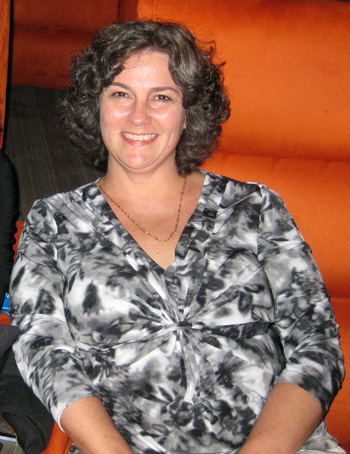 “It wasn’t what I expected — it wasn’t hard like a BB or soft like fibrocystic breasts. It was more of a mass. And when I looked in the mirror and turned a certain way, I could see a patch about the size of a quarter that looked different. It was a slight discoloration, almost imperceptible. I had some pain, but I assumed it was leftover nerve pain from a case of mastitis I’d had years ago,” Dowd says.

Most – but not all – breast changes are benign

When she finally went for a mammogram, there was indeed a mass. Medical personnel assured her that four out of five masses were benign, but further testing revealed this one was cancerous. She was 47 years old.

When she got the diagnosis, she recalls “I just kind of took it in and tried to process it. Of course, I asked, ‘Why me?’ I felt cheated, and that it wasn’t fair. But then I read the statistic that one out of eight women is diagnosed with breast cancer in her life, and asked, ‘Why not me?’ “

On top of everything else, Dowd was diagnosed the day after she filed for divorce. “Since this happened as I was getting divorced,” she said, “the thought flitted through my mind, ‘Are there men out there who would want to be with a woman who has been through this?’ “

But, she remembers, “I didn’t spend any time dwelling on this, and I didn’t see it as a death sentence. I kind of had the attitude, all right, what do I have to do next?”

The anti-nausea medications given with the chemotherapy worked well for Dowd, but she had other, more serious side effects. “My white blood cell count dropped so low that it was critical,” she explains. “They had to give me a shot of a drug that promotes rapid growth of white blood cells.” Fortunately, it worked. If it hadn’t, she would have had to discontinue the chemotherapy treatments.

After her diagnosis, Dowd received support from some unexpected places. A friend who had been diagnosed with testicular cancer at age 19 gave her his Relay for Life survivor medal, along with Lance Armstrong’s book It’s Not About the Bike. He also passed on a mantra he’d used during treatment: “Just put one foot in front of the other.” The day before her mastectomy, students in one of her classes used a whole class period to say what they loved about Ms Dowd. Another student made pink friendship bracelets for her classmates and Dowd to wear while Dowd underwent treatment. The head custodian shaved her head in Dowd’s honor. Students and their family members packed and moved Dowd from her soon-to-be ex-husband’s house to her new place.

Advice for women from a breast cancer survivor

You can survive one step at a time

Dowd had a clear mammogram in January, now has her own Relay for Life cancer survivor medal and is writing a book about her experiences. “If you are diagnosed with breast cancer, don’t view it as a death sentence. Just put one foot in front of the other,” she encourages all women.