According to National Cancer Institute statistics, one in eight women will be diagnosed with breast cancer in her lifetime. Despite that sobering statistic, an average of 89 percent of those diagnosed have a five-year survival rate. One major key to a woman’s full recovery from breast cancer is early detection. This is where the diagnostic tool breast thermography may be useful. 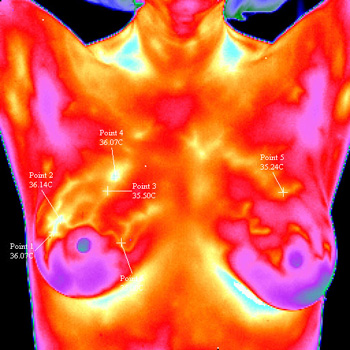 What is breast thermography?

Breast thermography, also known as Digital Infrared Imaging (DII) or Digital Infrared Thermal Imaging (DITI), is a simple,  safe, non-invasive test of the breast, according to Dr Lauren Feder. It involves no compression or radiation. “Thermography works by taking infrared images of the breast that detect minute temperature changes associated with breast inflammation and tumors. Having this information allows for the earliest possible intervention and treatment,” she says. Breast thermography has been in use since the 1970s and was approved by the FDA in the early 1980s as a tool for use in breast cancer screening.

Precancerous and cancerous masses need a large supply of nutrients to grow, “so they increase circulation to their cells by sending out chemicals to keep existing blood vessels open, recruit dormant vessels and create new ones. This process results in an increase in regional surface temperatures of the breast,” according to the International Academy of Clinical Thermology (IACT). These temperature and vascular changes, according to the IACT, may be among the earliest indicators of a precancerous state and/or breast cancer. In fact, according to some studies, an abnormal infrared image is the most significant marker of breast cancer risk.

While all women can benefit from breast thermography, Feder says, “It is especially appropriate for younger women (ages 30-50) whose denser breast tissue makes it more difficult for mammograms to be effective.” Women who have breast implants, are pregnant or are breast-feeding may also safely use breast thermography.

Early breast cancer detection is particularly important for younger women, because the disease tends to grow more quickly in younger women. According to the IACT, 95 percent of early-stage cancers will be detected if a multimodal approach is used (clinical examination, mammography and thermography). Feder notes, “It takes years for a tumor to grow, thus the earliest possible indication of abnormality will allow for the earliest possible treatment and intervention. Breast thermography can play an important role in monitoring breast health and assisting in early detection.”

The IACT also states, “A positive infrared scan may indicate the presence of many different breast abnormalities such as mastitis, benign tumors, fibrocystic breast disease, cancer and others.”

“There is no single method for the early detection of breast cancer,” Feder says. “Using a combination of methods will increase your chances of detecting cancer in an early stage. These methods include mammography for all women who are age 40 or older; regular breast thermography (DITI) screening for adult women of all ages; a regular breast examination by a health professional; monthly breast self-examination; personal awareness of changes in the breasts; [and] readiness to promptly discuss any such changes with a doctor.

“If you find a lump, act quickly,” she advises. “When cancer is found early there are choices for treatment, and with prompt treatment the outlook is good. In fact, most women treated for early breast cancer will be free of breast cancer for the rest of their lives.”