For the past few decades, we’ve been conditioned to be carbophobic because we’ve been told that pasta, rice and potatoes cause you to gain weight. Yet recent studies show that carbs not only help you lose weight, but they are also an essential part of a healthy diet. Here are eight reasons why you actually need to eat more carbs. 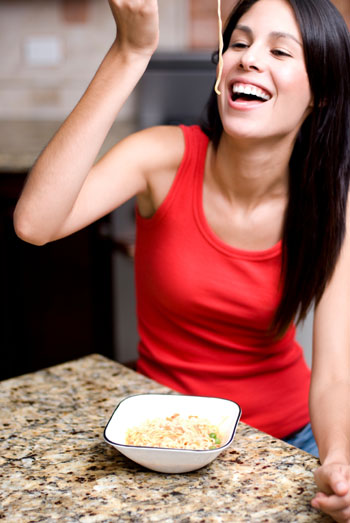 Carbs make you thin for life

A recent study found that the slimmest people ate the most carbs, while the chubbiest people consumed the lowest amount of carbs. Researchers conclude that you are more likely to become and stay slim when carbs consist of up to 64 percent of your daily calorie intake, or 361 grams a day (the equivalent of several baked potatoes!).

Carbs fill you up

There is a special ingredient in certain carbs called resistant starch, which resists digestion and helps suppress your appetite. Resistant-starch foods trigger your brain and belly to have a sensation of fullness, causing you to feel full longer — thus eat less. In fact, researchers at the University of Surrey in England found that study participants who consumed resistant starch in one meal consumed 10 percent fewer calories the next day.

Resistance-starch carbs raise levels of satiety hormones that suppress hunger and speed up your metabolism. Larry Tucker, PhD, weight loss researcher and professor of exercise science at Brigham Young University says, “High-fiber carbohydrates such as brown rice and grains allow you to eat to the point of satisfaction and still lose weight.”

When mixed with other foods, carbs control your blood sugar, lowering the chances of getting type 2 diabetes. In a study conducted at the Beltsville Human Nutrition Research Center at the U.S. Department of Agriculture, participants who consumed a diet rich in resistant starch lowered their post-meal blood sugar and insulin response by up to 38 percent.

Resistant-starch carbs boost your metabolism and your body’s other natural fat-burners by releasing fatty acids that stimulate fat burning, especially around your belly.

Certain carbs produce a fatty acid that helps you preserve muscle mass while increasing your metabolism so that you lose weight faster.

Carbs help you get rid of your belly fat faster than other foods, regardless of the number of calories consumed. Studies have shown that diets rich in resistant starch increase the effectiveness of fat-burning enzymes and decrease the effectiveness of fat-storage enzymes, which means the cells in the belly are less likely to store calories as fat.

To learn more about why you need carbs in your life, please visit www.carblovers.com.