You can’t believe your eyes: You’re no more than four feet away from your man, chatting with other wives at the company party, when a 20-something D-cup in a revealing blouse slips her arm in your man’s and whispers in his ear. He smiles. You frown. 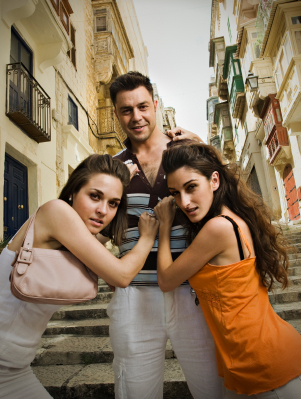 You charge over to him. “Who was that and what did she say to you?”

Startled, he replies “Oh, Bethany, from accounting. She said she liked my tie.”

“Uh-huh,” you think. Your tie. Riiiight.

The next day, at soccer practice, you notice one of the single moms flutter her fingers your guy’s way. You glare. She shrugs. “Who’s that?” “Marie. I helped her son with his soccer drill.” You didn’t know about that. But what you do know is that’s two too many gals interested in your guy.

And there could be more. Now that you think of it, he interacts with woman all through his day — not just at work, but at the coffee bar, supermarket, wherever he goes. And you can’t be there by his side to ward off every circling female predator.

What’s a girl to do?

Before you spend the entire month’s rent on Victoria’s Secret, or interrogate him on his every move, consider the following:

Studies show that fully 70 percent of a man’s marital satisfaction comes from the friendship he has with his spouse.

That’s right: It’s friendship — something that develops over time, as we share and support wholeheartedly each other’s lives, hopes and dreams — that drives your guy’s marital happiness.

If you want to protect your relationship, look first to the quality of your friendship. Are you involved and interested in what matters to your mate? Do you make an effort to stay current with what is going on in his life apart from you and the kids? Not just his work, hobbies and projects, but also his inner life: What he thinks about, what fascinates him, what worries him. Do you share his enthusiasms, support his goals?

One of the reasons so many affairs are with co-workers is that the co-worker shows interest in a guy’s work, long after his wife has stopped asking about it.