Lori never thought she would conceive, so she was thrilled when she became pregnant with not only one child, but two. Despite an 80 percent chance of losing the twins, Katy and Paige were born premature at 28 weeks gestation. 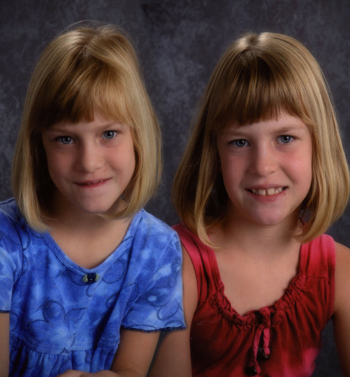 Katy was born at 1 pound, 15 ounces. Two weeks after her birth, Doctors inserted a titanium clip to close the valve in her heart. She also suffered from a brain bleed and faced cerebral palsy, which fortunately resolved on its own. It took over a year for Katy to recover.

Paige was the smaller of the two, born at 1 pound, 4 ounces. She had several infections during her stay at Renown Children’s Hospital, which included five ear surgeries. Paige did not initially have the stamina to complete her feeds, and couldn’t gain the weight she needed. Slowly and steadily, however, the twins began to conquer their early set backs.

Though identical in appearance, these 7-year-old sisters could not be more different in personality. Katy is a nurturer and known to give therapeutic hugs when a person is upset, while Paige’s matter-of-fact personality expresses, “Aren’t you over this yet?”?

6 hrs ago
by Lauryn Higgins