The list of complications 4-year-old twins Sara and Emily suffered at birth is long and difficult to pronounce: patent ductus arteriosus, bradycardia, necrotizing enterocolitis, intraventricular hemorrhages and many more. 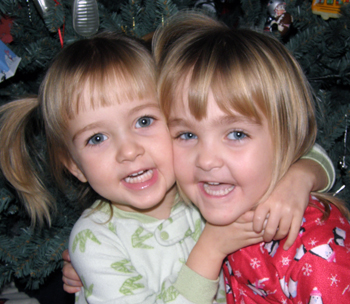 The girls were born three months early and together weighed less than five pounds. From one minute to the next, no one knew if they would survive. Sara, with underdeveloped lungs, struggled to breathe. Emily suffered two brain hemorrhages. Doctors feared Emily would never walk or talk, if she even survived.

Specialists at Children’s Hospital Boston watched them both around the clock. They alleviated the swelling of Emily’s brain and placed Sara on a special device that kept her fragile airways from collapsing. Countless other crucial but daunting treatments continued. The amount of IVs connected to their tiny bodies was astounding. But despite their size, they possessed amazing strength. After nearly three months in the neonatal intensive care unit, the girls went home for the first time.

Their parents say the girls’ personalities have become clear as they aged. Emily is a vocal, easygoing leader who is lovingly known as the “mayor” of her pre-school. Sara is a strong, sweet child who makes sure others are happy and taken care of, just the way the hospital took care of them.

7 hrs ago
by Theresa Prenger