At a time when most expectant parents are busily preparing their home for their new bundle of joy, Tim and Amy suddenly had to prepare for the worst. 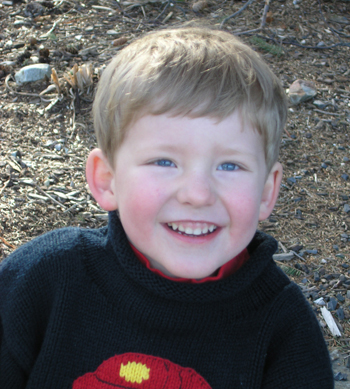 Nearly six weeks before their son Clayton was due, Amy underwent a placental abruption—a rare but very serious complication with a fetal mortality rate of up to 40 percent. If they didn’t act soon, Clayton would face brain damage or even death. Amy’s life, too, was in danger.

Doctors performed a Cesarean section and Clayton was immediately transferred to Eastern Maine Medical Center. Because he was born early, his lungs were underdeveloped and he needed the specialized care of the neonatal intensive care unit. Miraculously, Clayton only spent several days there before going home.

Clayton doesn’t remember anything about his harrowing entrance into the world, but now at age 4 he has a flair for drama and loves to tell big stories. His family has shared their story to help raise funds for Children’s Miracle Network and their hospital, and now Clayton is doing his share of talking, using his vibrant imagination to entertain and touch hearts wherever he goes.