Summer is the season for sex that sizzles. Except that it doesn’t always go down like that. Real women told us what they learned from their hellish, hilarious and sometimes hot summer flings. 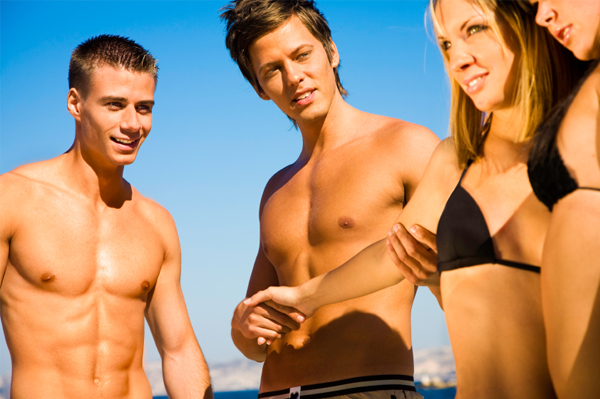 Getting dirty in the sand… is just dirty

“I learned never to have sex on the beach, because the sand burns in certain places.” Lee C.

drinking with your crush = bad

“I learned not to bring the bartender home for a bonfire after two Manhattans on an empty stomach. Because he’s going to see the Manhattans again on his shoes.” Jen F.

“I learned never to accept his friend request on Facebook, because then when we inevitably break up, I have to see him posing with other girls in bars while he’s wearing a turtleneck sweater. Ugh!” Annabelle W.

watch out for creepers

“I learned that if a guy only calls late at night, hides his car around the block because he ‘doesn’t want anyone to mess with it,’ (huh?!) and eats smelly things like onions and garlic, he’s probably not that into you.” Jocelyn H.

don’t do it in dad’s house

“I learned that when you’re 19 and you don’t have a place to have sex, make sure your summer fling has a large vehicle. Like say, a mini van with the seats taken out?” Michelle G.

if he has a thing for tobey maguire… run

“We met at a wedding. He whispered sweet nothings in my ear,  which were literally sweet nothings because he was drunk and it sounded like he was saying stuff like ‘turtle’ and ‘apple’.

“We proceeded back to my apartment where we made out,. He must have spotted my Spiderman DVD. because then he whispered, ‘Can we watch Spiderman?’ I was in hate.

He cuddled with me throughout Spiderman. I was back in like. He then told me he had to go, because he had to be at the mall soon to open. He was a Mall Cop. I was in hate.

“Then he gave me a sob story about how he lost his wallet and he had to pick up medication for his sick mother, and I believed it. Actually, I don’t know that I did so much as I wanted him out of my house. So I have him $100. I was now in debt.

“So, what did I learn? If a guy at a wedding sounds like he’s whispering sweet nothings in your ear, but you can’t make them out more than the words ‘turtle’ and ‘apple,’ give up on him right there.” “Jersey” from NJ

“In high school, I was down the shore with my friends and we met some guys. One guy was really hot, and my friend, who was kind of easy, liked him. So did I. I went for it, and we ended up hooking up. We made out on the beach and it started pouring rain. That was cool. It was kind of like a movie scene.

“My friend ended up banging his not-as-good-looking friend. I guess my lesson was shoot for the hottie, even if you think he’s just looking for the easy girl.” Lucy D.

“I learned that a one-night stand can be awesome. I was 23 and down the shore with my friend, Anne, and we met these guys while we were walking around. We asked them how to get to a local club. About a half hour later, we saw them there. The one guy came over and asked if I wanted a drink. He was blond, blue-eyed, buff and tan, so I said, ‘Sure.’ He bought me a drink, and said, ‘Wanna dance?’ And I said, ‘Sure.’ We danced, and he said, ‘Wanna come back to my place?’ And I said, ‘Sure!’

“We had sex in the shower, sex in the backyard, sex upstairs. And he had tan lines. Hubba, hubba. We got up the next morning, and I asked him to drive me back to my car. We got to my car, and I said, ‘I had a great time.’ He said ‘I did to!’ We said good-bye, and that was that. No strings attached.” Beth C.

Where to travel in the summer for romantic couples
Sex in the summer
Sensual vacations: Putting the spark back into your sex life