We asked our readers: What is the most challenging part of marriage? Thousands of women responded, and most agree that communicating with your man is the hardest part about being married. What else is keeping you from wedded bliss? Check out the results below. 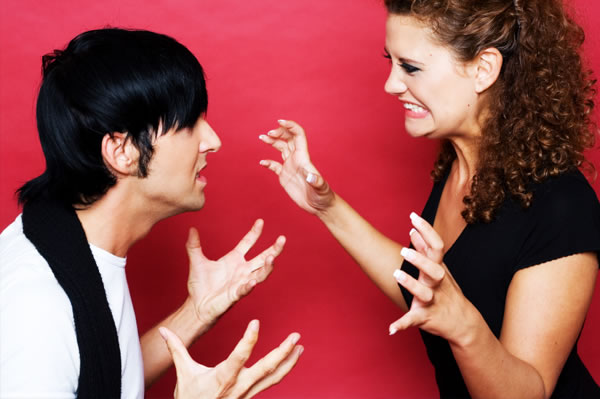 And The most challenging part of marriage is…

Thirty-six percent of readers say that the hardest part of being with a man… is talking to him. Indeed, statistics show “lack of communication” to be one of the leading causes of divorce in the United States. So are men and women really from different planets?

According to Dr. John Gray, author of Men are From Mars, Women are From Venus, the differences in communication style may be linked to structural differences in male and female brains. While men’s are larger in size, women’s have reportedly more neural pathways. Men are left-brained, signifying a focus on logic and problem solving (and SportsCenter….). Women use both sides of their brains, hence why we are able to connect our emotions with language and logic.

A study in the July 2000 issue of Psychological Review revealed that men and women biologically deal with stress differently. Women are hardwired to seek solace in others — communicating our fears and concerns actually lowers our stress hormones. But men resort to the caveman method of dealing with stress: Fight or flight. For him,”We have to talk…” might as well be two giant mastadon tusks charging straight at his manhood (the “tusks” being your “feelings”). When men are stressed or a conversation gets particularly heavy, they will either accept it as a challenge and fight back… or run like hell. Ever wonder why he’s watching the TV instead of listening to your crappy day at the dentist? He chose flight. 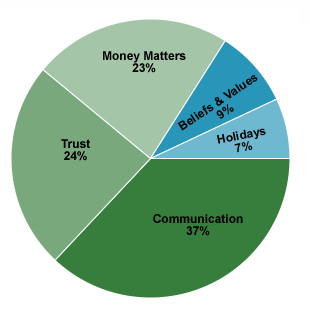 In other words, talking about problems calms women down — but for men, it riles them up. So, instead of barking at your husband for leaving the toilet seat up, it might be more effective to address it from a logical standpoint (“Honey, by simply rotating the toilet lid 160 degrees, you will save my bum from a minor altercation with the toilet bowl at 3 am”) rather than an emotional one (“You stupid [bleep]!”). Even simpler? Just say, “I have a problem. Can you help me?”

Polish up your communication skills with these tips on relationship talk:

Talking to men: The one thing all women should know
Effective face-to-face communication
How to fight with purpose

Trusting your boo came in second place (with 24 percent of the votes) for the toughest part about being married. Thanks a lot, Jesse James and Tiger Woods… In fact, as of April 1, almost 37 percent of you reported a heightened suspicion to your man’s whereabouts ever since news of Tiger’s infidelity broke. But before you make a mad dash for his text message history, know this: Lack of trust can be very harmful to a relationship. “Paranoia tears families apart and is a huge roadblock to healing,” says Dr. Neil Cannon, a certified sex therapist.

For more on trust and cheating:

Has Tiger Woods made women more suspicious?
10 Signs he’s cheating on you
Sex frequency and the desire to cheat
Online sex chat: Is it cheating?

Following trust are concerns over how you spend your money (23 percent), while 9 percent say you just can’t agree about how to raise the kids. Differing beliefs can lead to serious verbal and emotional clashes, especially when it’s about something that’s important to you — like those totally cute Michael Kors sandles at Bloomies that are totally worth $650 (in your humble opinion). The key to overcoming clashing beliefs is logically communicating your side, then quietly listening to his. Understand where he is coming from. Then discuss a compromise that you both agree upon.

Learn more about improving your finances and family matters:

But who could forget the in-laws? Six percent of you attribute your marital issues to having to spend Christmas with his crazy Uncle Charlie. But let’s face it — three hours worth of “Pull my finger” once per year isn’t that big a deal. In fact, by putting his family down, you’re putting him down. According to one of our writers, “The more mutual respect and enjoyment you experience with your in-laws, the more security and stability you and your spouse will enjoy in your marriage.” In other words, don’t sweat the small stuff. Life is much too short to worry about something as trivial as his nagging mother.

Oh those crazy in-laws! SheKnows shares some ideas on how to deal with them:

Relationship builder: Enriching your relationship with the in-laws
How to deal with your mother-in-law
How to survive holidays with your dreaded in-laws

What do YOU think is the most challenging part of marriage? Tell us below!

12 hrs ago
by Gina Escandon

14 hrs ago
by Kimberly Zapata