Just like our wardrobes, our dating habits need an update now and then. This especially goes for women still wearing 2002’s approach to finding Mr. Right. Here’s how to discard some of the more drab or defeating dating habits that might be keeping you in a rut and away from romance. Here are 11 you should ditch after 30. 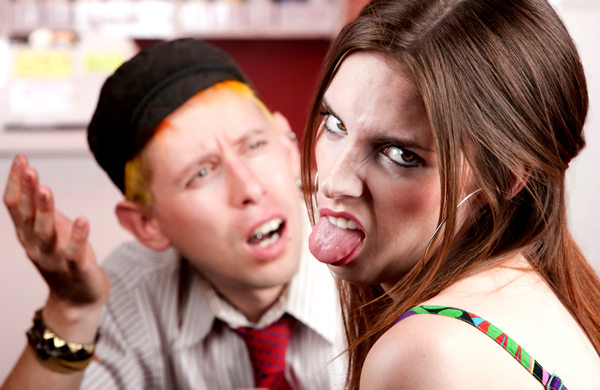 We know, we know — you just can’t resist those blond surfer-boyd with taut abs and amazing shoulders. But guess what? It quite obviously hasn’t worked out with “that type,” or else you wouldn’t still be single. So why not try someone new? We’re not suggesting anything drastic — maybe upgrade to a brown-haired surfer.

2. Relying on the bar

You claim you want a man who is not shallow and has interests outside of guzzling beer while listening to a crappy cover band. Then why are you still scoping out dudes at pubs? You won’t find the man of your dreams surrounded by seven empty Heineken bottles. You might have better luck at the coffee shop or the park.

We’re not suggesting you settle. Rather, keep an open mind about men you meet. So what if he has love handles or has never seen The Godfather? The man you’re going to end up with is real — keep Prince Charming in the Disney movies where he belongs.

Your 20s are a time for exploration and mistakes. By the time you hit 30, you should know that going out with 10 losers won’t make a winner magically appear. You are allowed to say “no” to a dude who digs you, but who you don’t dig back, or to a man who is just not up to your standards.

You have to wait two dates to kiss him, three months to sleep with him… please. You are a grown woman who is allowed to do what she wants. And if you want to shag a guy on the first or the 10th date, go for it, so long as you’re safe and it’s your decision.

6. Getting hammered on a date

Sex and the City’s Miranda once drank to enhance her confidence while out with a hot detective. Instead of being impressed, he recommended she go to rehab. Get the hint? Put down that third martini and put on a big smile instead. That’s a better way to engage your date and the let the real — i.e. sober — you shine through.

7. Thinking you can fix him

You can change your drapes and your hairstyle, but you can never — we repeat, never — change a man. Stop looking for “potential” and focus on reality.

[Love editor’s note: The “reality” being the maxim by which every woman should live: Once a douche, always a douche.]

8. Thinking he can fix you

Are you still chasing arrogant losers who are probably sleeping with every woman in the bar? Here’s a better idea: Give the guy who is nice, respectable and actually calls you a chance, and maybe he’ll turn into the “bad boy” you idealize in other areas…

If you go into every single date expecting fireworks, you’ll be met with fizzle. Dating is supposed to be fun. So drop the serious, desperate-to-settle down shtick, and just let a dude buy you dinner and make you laugh (we hope).

11. Sleeping with him on the first date

[Love editor’s note: Ladies, I thought this important to add.] It’s OK for a girl to get some. But don’t be surprised if he doesn’t call the next day. Seriously. It doesn’t matter what kind of “connection” you had. It doesn’t even matter if you were the best lay he’s ever had. You forfeited your potential as relationship material. End of story. Stop texting him.

Top 10 ways to pick up a guy
What not to say on a first date
Men to avoid: 7 non-negotiable types of guys