Once the bloom is off the rose, some (OK, most) relationships enter the lukewarm zone. He wants sex. You would rather watch Desperate Housewives. You love gabbing about that bitchy girl at work. He would rather watch sports. So… are men and women really compatible? More importantly, is happiness possible with a man? 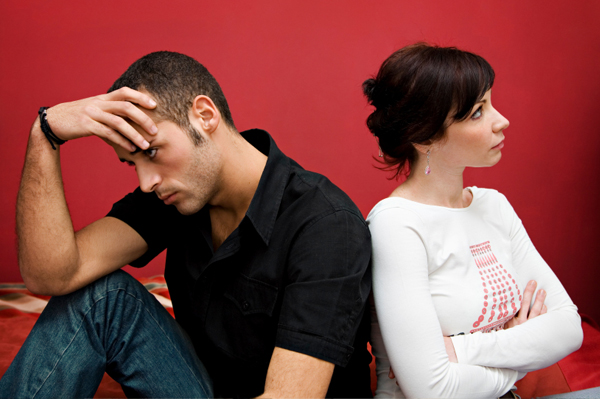 I remember being a child, going to the diner with my parents every Sunday morning for brunch and looking at the couples around us, sitting across from each other, not speaking a word to one another, waiting impatiently for their food to be served. Even at 8 years old, I swore to myself — when I got married, my husband and I would never run out of things to say and never sit across from one another. We’d sit on the same side all cozied up.We’d be one of those forever married couples who fifty years in, would still be gazing into one another’s eyes longingly, feeling that romantic fire in our bellies, gently caressing the other’s arm while puttering around the kitchen and finishing each other’s sentences. Then I got married.

No, this will not be a column about bashing marriage, lamenting about how hard it is for two people of the opposite sex to live together on a daily basis, because, well, that’s obvious. Just our differing toilet seat styles could cause me to go off on a three-page rant. There have been countless times I’ve fallen into the toilet bowl at 3 a.m. because I believed that after nagging my husband to put the seat down, well, he would. And, of course, he didn’t and doesn’t. Or the fact that my husband feels it’s perfectly acceptable to wear the same pair of jeans for at least a month and tells me that my need to wash them every other day is ruining them. I, on the other hand, prefer to think of it more as my desire to simply be clean.

But I wonder if the basic differences between men and women, which run so much deeper than putting the toilet seat down, can be detrimental to their ability to truly find happiness in their union? Fundamentally all men and women are different — and, quite literally, the opposite of each other. My husband, like so many married (and single) men, does not feel the urge to get into long-drawn out discussions and could quite possibly live out the rest of his years in a mud-hut, just so long as he could listen to sports games on the radio. While I, on the other hand, could spend hours exploring the undercurrents of our relationship and strategizing ways to broaden the lines of communication. You couldn’t pay me to sleep in a mud-hut, and I have zero interest in any type of sport — unless it’s figure skating (which my husband doesn’t think truly qualifies as a sport).

so how do you make it work?

So what is the glue that holds our marriage — and so many of these forever married couples — together? Is it listening to experts who throw around tips like “have more sex,” “learn to trust” and “make the effort”? To be sure, having more sex can never be a bad thing for a marriage, and can certainly help to gloss over differences at least temporarily. But what it ultimately boils down to is what type of person you’re with and your level of commitment. That you both wake up each morning and make a commitment to be present in and work on your marriage and despite your differences, you both choose to be there (even when you feel like you want to get in your car, drive off and never look back).

You both choose to share in the small, mundane stuff. For instance, I agree to let my husband listen to sports radio all night long because it helps him fall asleep, and he, in turn, brings me tea with three sugars (even though doing so goes against his grain). You both must also be willing to weather the larger obstacles that will arise — like my husband’s recent identity crisis (I promise more about that in a future column). Sure, I wish he’d be more effusive, although I’m probably effusive enough for the two of us. In fact, he would say that I should be less impulsive. And while we may fight about his aversion to watching any movie remotely deemed a “chick flick,” when I see him doing math homework with our daughter and getting on the carpet to play cars with our son, well… all that other stuff just melts away.

Ultimately, I think it boils down to this — making a commitment to work on your relationship and loving the other person in spite of their flaws, and sometimes even coming to appreciate their idiosyncrasies, is what makes a great relationship. For better or worse.

Find more on marriage on SheKnows:

Real couple gripes and how to solve them
De-stressing for couples
How to keep the romance alive (and hot!)