“Call it crazy or ironic or simply perfect justice, but when I stopped starving myself, my career took off.” So says leading plus-size model Crystal Renn in her autobiography, Hungry. In the book, released in September 2009, Renn recounts her years struggling with anorexia and exercise bulimia in order to remain a so-called “straight-size” model. The memoir also chronicles Renn’s ultimate decision to abandon the confines of straight-size modeling, return to her body’s natural, healthy weight and her success in conquering the plus-size industry. Isn’t it time to embrace your size? 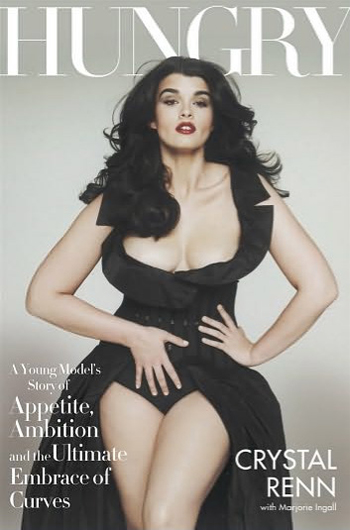 But while Renn has found unprecedented success in the plus-size world, she doesn’t believe the body type she represents should necessitate a distinctive category. As she points out, “the average American woman is five feet four inches and weighs 155 pounds…As far as I’m concerned, the next frontier in fashion is having plus-girls posing in meaningful numbers among the straight-size models across brands and jobs.”

Is the fashion world ready to embrace real-bodied women and turn its back on the familiar, emaciated frames that typically populate the catwalks? Renn certainly thinks so. “Things are starting to change,” she writes in Hungry. “There are a few more size 2 and size 4 girls on runways. No, there are no 16s or even 6s. But we’re taking baby steps in the right direction.”

Apparel Arts San Francisco student and aspiring designer Max Larson believes the fashion industry may be beginning to incorporate varying body types, but still holds on to steadfast conventions. “In some ways, I do feel the industry is starting to promote a larger variety of bodies, but if you pick up a Vogue or Elle, you’ll find that the magazine is still full of rail thin models,” Larson says. “I think there is a lot of talk of change in the film and television industry, which is wonderful, but the modeling industry is a bit behind and is still promoting unhealthy body types. I think it’s very divided in modeling. You have agencies for the super-thin girls and the plus-size girls, but what about models that promote health? I think it’s important that there be an in-between. There are tons of different bodies, not just thin or curvy ones.”

What is wrong with real-body women?

Larson isn’t alone in his skepticism of the fashion world’s readiness to accept different body types. A recent article in Page Six Magazine titled “Gemma Ward, A Supermodel Betrayed,” chronicled the curious disappearance of a fashion darling from editorial pages and runways. Many industry insiders suspect 22-year-old Ward has stopped receiving work from her agency, IMG, due to her weight gain.

The article quotes a photo agent who worked with Ward as saying, “Every six months you get a new crop of girls. For every one with staying power, like a Kate Moss, there are 20 who don’t make it past 18. You gain weight, and you knock yourself out of the running. It’s an image-driven industry that doesn’t take kindly to the girl who bucks the trend. Clients start saying, ‘She’s fat now, don’t book her!’ If you want to be cynical about it, looking that way was her job. She doesn’t want to do what it takes, she’s not going to get work. That’s just the way it is.”

Though high-fashion may be slow to alter its rigid view of beauty, more mainstream outlets are making strides in promoting body acceptance. Glamour magazine often features Renn in its fashion spreads and editor-in-chief Cindi Levine recently wrote of a Body Image Revolution, encouraging readers to voice their views on beauty after the publication ran a nude photo of plus-size model Lizzi Miller that seemed to hit a nerve with Glamour devotees. “The emails were filled with such joy — joy at seeing a woman’s body with all the curves and quirks and rolls found in nature,” Levine wrote.

Beauty comes in all shapes, weights and sizes

While some fractions of popular culture continue to grow more accepting of diverse definitions of beauty, others remain entrenched in their staunch convictions. Is it important for an industry as conspicuous as fashion to take responsibility for promoting health over image? Many within the business seem to think so. “Models are the ambassadors of fashion, beauty and trendsetting,” Larson says. “Therefore, it is important that the modeling industry represents all bodies. The world is not made up of size double-zero women. The body each one us has is a very valuable thing and it’s not fair for a person to flip through a magazine or watch a commercial that promotes ‘this type’ or ‘that type’ as most beautiful. There should be variation of bodies advertised. After all, if you look around, that’s the real world.”