If we had a nickle for every celebrity cheater to grace the pages of SheKnows Entertainment in 2009, well, let’s just say that would buy us a lot of dog treats. Speaking of dogs, here are the top 10 celebrity cheaters of 2009. May 2010 be this juicy.

What a year. Incest, harems, strippers. Who needs Vegas when you have America’s greatest pasttime? And by that, we mean being a womanizing, cheating bastard. Read on for our Top 10 celebrity
cheaters of 2009. 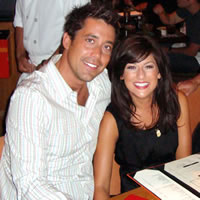 Dude is lucky enough to win the girl on national TV – and then cheats on her? Ed Swiderski won Jillian Harris’s heart on The Bachlorette — after not even appearing on part of the season!
Rumor has it Ed had two women back home in Chicago while he was taping the series — kind of ruins the romance of that climatic proposal moment. Whatever. We always knew not to trust men with
bulging eyes.