Tiger Woods nearing divorce? The epic divorce of Jon and Kate finalized. Entertainment headlines are never without celebrity marital breakups and scandals. Even your local news is ripe with stories of marital duress. Even though divorce is a daily newsbyte and nearly half of all US marriages end in divorce, the decision to end a marriage is rarely an easy one. However, when a family is wrought with silent tension, loud arguments, disgruntled kids, and an unshakable sense of emptiness, divorce can seem like the simple solution to having a happy – albeit separate – family. Susan Pohlman, author of Halfway to Each Other: How a Year in Italy Brought Our Family Home (Guideposts, October 2009) was on the brink of divorce when she decided to try an unconventional marital strategy to keep her family together. Did it work? Keep reading to find out. 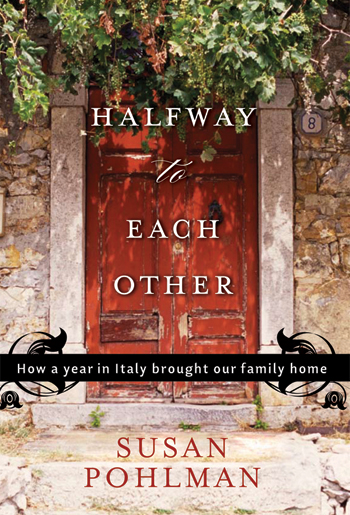 Tired, empty and disillusioned after 18 years of married life, Susan Pohlman was ready to call it quits. But in her new memoir Halfway to Each Other, Pohlman tells the story of how her
broken marriage received the healing it desperately needed. Though Pohlman and her family left their busy American lives behind and deeply bonded as a family in a small village on the Italian
Riviera, she is certain that the lessons her family learned while living simply – yet adventurously – in Italy can be learned wherever a struggling family happens to be.

Unhappiness can be a detriment to health

SheKnows: The decision to get divorced is never an easy one, and seems more difficult when children are involved. What was so terrible about your marriage that you felt you needed
to divorce?

Susan Pohlman: To say our marriage was terrible would not be a fair statement. The decision to divorce was mine, not my husband’s. We had reached a point where we were
unable, or unwilling, to communicate in a meaningful way. The stresses of an overscheduled lifestyle, with endless checklists to complete each day, had worn us both down to a point where we were
leading parallel lives under the same roof. Intimacy had walked out the door long before we noticed, like the guest of honor who sneaks out while the rest of the party rages on. We were worn out
from analyzing what was wrong. We were lonely together and nothing we tried seemed to change our dynamics. When this unending sense of unhappiness began to affect my health, I needed to take
control of the situation and change it. At that time, I did not think I had any other option though the thought of divorce was breaking my heart.

SheKnows: Recent research from the National Institutes of Health indicates that divorcees are significantly more at risk for chronic illnesses, but research also indicates that
unhealthy relationships can be detrimental to health. What physical and mental health detriments did you experience leading up to your decision to divorce?

Susan Pohlman: Extreme stress, without relief, regardless of its cause is never healthy. In my case, it manifested itself though weight loss, difficulty sleeping, and an
overwhelming lethargy that sucked the joy from the air around me.

SheKnows: Did your kids also suffer physical or mental health detriments during the period of time before you and your family moved to Italy?

Susan Pohlman: My husband and I were very careful not to expose our children to heated discussions between us. Though I am sure that one could cut the tension in the air with a
chainsaw at times, the kids were young enough to be engaged in their own lives and remained generally oblivious. Toward the end, when I made the decision to set the separation process in motion, my
daughter began to have difficulties in school.

Taking a risk can be a wise decision

SheKnows: The decision to move to a different country is impressive. What was the most compelling factor in your decision to do so?

Susan Pohlman: This is difficult to explain fully so bear with me. When we left on that fateful business trip, we had no plans to make any such decision. We had never been to Italy
and saw it as business, with perhaps a few great dinners and bottles of Brunello thrown in. That changed the moment I set my feet upon those ancient cobble stoned streets. Italy “had me at
hello.”

Besides being steeped in art and history, there was a spiritual energy that could not be denied. Both my husband and I were unnerved by it, thrown off our dysfunctional axis. When Tim pondered
aloud about moving there, the idea grabbed hold of our souls and would not let go. As ridiculous as it sounded even to us at the time, the push toward doing it was unrelenting.

I knew that if I said no and flew home, it would be the end of our family unit as a whole. This was it. I had a choice to make that became clear: whole family or broken family. Did I have the guts
to put it all on the line for what I believed to be most sacred? Did I have enough faith to let go and trust God? Did I even know what real love looked like? At age 44, suddenly aware of an
endpoint in my life, I needed to know the answers to these questions. And luckily, so did Tim. We held up our pathetic little white flags and surrendered to each other. This would be our chance. It
was worth a try.

SheKnows: Couldn’t marital therapy have proven to be a cheaper more practical alternative?

Susan Pohlman: We tried that on several occasions. Nothing changed in the long run. With the amount of money we put into therapy, we probably could have stayed in Italy another
year!

A change in scenery can be profoundly healing

SheKnows: How did getting out of your regular home environment benefit your marriage and your family’s health?

Susan Pohlman: This was the key to our success. Stepping outside of American culture enabled us to study ourselves and American life from afar. Though, intellectually, one can
imagine the differences in culture, it is an entirely different matter to live the change on a daily basis. Truths are revealed in subtle ways. Sometimes we are so close to a situation that it is
difficult to analyze it objectively. Without radically changing our environment, I don’t know that we would have been able to see beyond the paradigm within which we had lived for so long. It
is difficult to imagine that the very life we worked years to achieve was causing us a slow death, like the smoker who can’t figure out why he can’t seem to catch his breath. The
challenge of setting up family life abroad forced us to start over and work together on every level. The adventure of such a year provided new, and quite unexpected, opportunities to share and
laugh. To be pushed beyond our self-imposed limits was exhilarating and life changing.

SheKnows: What emotional changes did you experience in Italy that brought you and your husband back together?

Susan Pohlman: The most simple and profound change was due to slowing down, or in this case, coming to a complete halt. Suddenly the spaces between us were not filled with work,
chores, household responsibilities, social pressures and general minutiae. Questions like “What shall we do together today?” and “Would you like to go explore a hilltop
village?” became common. The empty spaces gave us room to reach toward each other. Simplicity ruled the year: going to the market, hanging laundry on the line, meandering down ancient
alleyways, watching the sunset over the Ligurian Sea. Such were the activities that filled our days. Not once were we bored. Not once did we forget to raise our eyes to heaven and give thanks. A
renewed sense of shared spirituality was an important ingredient in our ability to come together. There is nothing better for a marriage than two souls refreshed.

SheKnows: What advice can you give couples who are in an unhealthy marriage regarding their options to divorce or stay together?

Susan Pohlman: Though every situation is unique, I would urge all couples to take some time to reconsider their situation. The best advice that a therapist ever gave me was
“Nothing has to happen today, tomorrow, or next week. This decision will change your life in positive and negative ways that you are not even aware of yet.” It gave me permission to
take my time. It gave me a chance to think outside the box. When children are involved, repercussions last a lifetime. Ask yourselves the same hard question that we figured out the hard way,
“Is your lifestyle in the way of your love?” Too much of a good thing is still too much. We found that we were the same two people that fell in love 20 years earlier. Those two college
kids? They were still deep inside, just covered in layers of misguided years.

SheKnows: Compared to your well-being during the period of time before Italy, how is your health physically and mentally now?

Susan Pohlman: We have never been happier. Though we have had our challenges regarding reverse culture shock and new careers, we remain very peaceful in our hearts and in our home.
We know who we are as a couple and a family. Thank you for this opportunity to speak to you regarding this amazing, transformative year!