I have a confession: a boyfriend (now an ex-boyfriend) once gave me cash for Christmas. Really? Cash? I wish I was kidding, but it’s true. I was livid, of course. He justified that he didn’t know what else to get me. If it hadn’t been for the cash, he might’ve turned up with something absolutely useless. News flash, men, never give a woman cash – unless you’re her uncle or grandfather. Here’s how to deal with bad gifts from the BF. 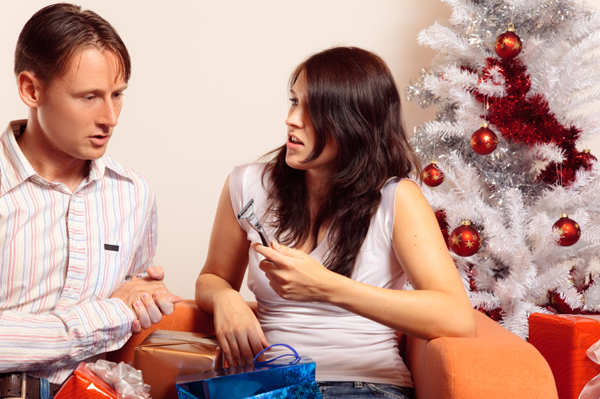 As furious as I was then, I can’t help but look back and wonder if I should have handled the situation differently. I was a little short on cash at the time. And I could have ended up with a really bad gift — something I’d return or throw in the trash. What’s a girl to do?

I turned to my wise girlfriends for their advice about how to deal with bad gifts from boyfriends. In case your beau gives you something less than desirable, you’ll be armed with this advice!

‘I never really received a bad gift per se,’ says Elizabeth Caputo. ‘I’ve received jewelry than I’m not 100 percent crazy about but wore anyway because I didn’t want the guy who gave it to me to feel bad.’ We agree with Elizabeth. It’s the thought that counts, right? Men aren’t so style savvy. They can’t help but get something that’s not your taste. They don’t know any better.

Set Aside Your Expectations

‘One time a boyfriend told me a month prior that he was planning a surprise for me for my birthday,’ recalls Elizabeth. ‘It was my birthday and the ‘surprise’ was a night out in Manhattan and tickets to a play.’ As it turns out, that was Elizabeth’s birthday gift. Sounds like a great gift, sure, but for Elizabeth, disappointment overcame her. ‘I reacted weird — not on purpose — because I thought that ‘surprise’ was in addition to a birthday gift,’ she explains. So when she didn’t get a gift on top of the experience, a huge fight erupted. Ladies, avoid a fight like this during this time of year by setting aside your expectations. Isolate yourself from your expectations and assess the gift for what it is. Odds are, you’ll be happy — unless the gift is really terrible, that is.

Say No Way to Tacky Gifts

Annie Lam once got copied CDs from a boy. Although the homemade ‘mixed-tape’ aspect of this gift sounds very desirable to a sentimental girl, for Annie it wasn’t. ‘The CDs weren’t wrapped — they were packed in a FedEx packing envelope sealed with black masking tape,’ Annie explains. ‘It just looked cheap and tacky.’ When we asked Annie how she reacted to the super-random present and wrapping, she responded, ‘Ummm, gee… Thanks?’ Her facial expression told it all. ‘I can’t hide my feelings with him,’ she adds. If you encounter such a situation, Annie advises that you should be honest. ‘If you really like the guy and you know his intentions behind the gift, be polite,’ she suggests. ‘The gift is about the thought, not the value of things. But an obviously bad gift that’s ripped off from the Internet and wrapped in a packing slip — no.’

I asked one of my guy friends how he thinks a girlfriend should react if she gets a bad gift from him. After all, it’s only fair. ‘It’s tough, but I think it’s one of those balancing acts that are rarely executed well,’ says Eugene Oh. ‘You want to be appreciative, but give him your honest opinion.’ Eugene thinks there’s nothing worse than a girl who’s being honest but doesn’t show any gratefulness. He suggests you say something like, ‘Honey, this is so sweet of you, but I already have one of these,’ or ‘Thanks so much, but this really isn’t my style.’