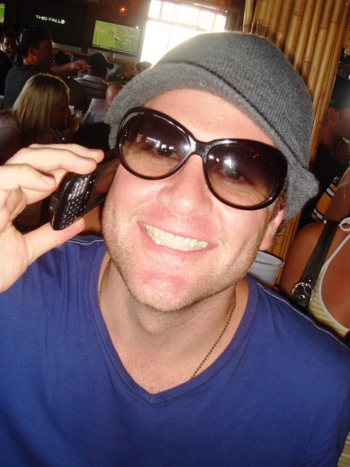 I am a 35-year-old West Coast vagabond living in Southern California. I was born and raised in Montana. We were very poor, so at a very young age, I learned how to hunt and fish. It is pretty funny
to tell the people of So Cal that I know how to gut and quarter a deer — great beer-drinking conversation with the fellas but nothing I ever bring up on a date.

My senior year of high school set the stage for me and some random life choices. First, after graduating, I took a year off from college to help a friend. Second, I applied and was accepted to
Northwest Bible College as a pastoral ministries major. Third, I was kicked out. They did not like the fact that I really like ladies and that I really, really like beer. So they asked me to leave
and never come back. Fourth, I took a road trip that was supposed to end in San Fran, but we ended up in Mexico on a beach, drinking beers and enjoying street tacos. A friend told me about a
college in Costa Mesa. I went in, got accepted and got my funding all in the same day. And random has led the way ever since…

After two years and a degree in communications, I got a job as the West Coast sales manager for a beer company.  I traveled the US hyping a tattoo contest.  In the end, a guy got a
54-inch tattoo, and the company I worked for gave him a Harley. It was a wild ride, to say the least. I left beer for tech and moved to No Cal during the tech boom. Just before the bottom fell out,
I was recruited to move to Portland to help with a billion-dollar acquisition. After that job, So Cal came

calling again, so I moved back to Costa Mesa and helped start a financial services company.  After two years, the company was acquired and I retired. Well, kind of.

My retirement was spent creating Star38, Mint Telecom and Umbejo. Star 38 ensured that people wanted me dead. Mint let me know that we were five years ahead of the rest of the world. Umbejo let me
know that people love to flirt [in] texting. I traveled to Brazil, England, France and Greece and found a way to blow all my money. That written, I had a blast. I highly recommend blowing money
once, maybe twice, in your life.

I came back to So Cal to help a friend launch a new yacht line for the West Coast. I became a regularly quoted person on CNBC. I became a partner in several big-game marlin fishing tournaments. I
started working again. It felt good and still feels good. Currently, I am working with several groups helping build and create new ventures and having fun.

My free time is spent playing hoops at the gym, going to live comedy, enjoying cold beers at the beach and [doing] some dating. And how can I forget my blog  — the worst advice in the world or the best, only you can decide. Really, it is all about poking fun at the world around us from news to relationships. My
personality and odd insights on life are fully exposed there.

Fun side notes: Over the past six months, I have gotten Dr. Phil’s wife drunk. I have been lucky enough to get some rock star love in Vegas — thank you very much, Wasted Space. I have two drinks
named after me in four different states. Most importantly, I am still having fun and loving life. You can’t ask for much more.

See Jason’s answers to our burning questions next!