Breast cancer is a pervasive, potentially deadly disease that strikes both women and men. According to the American Cancer Society, breast cancer accounts for one in four female cancer cases and, though much more rare, one in 1000 men are at risk of developing the disease throughout their lifetime. Maintaining a healthy body weight is a key in preventing breast cancer, as is following a healthy diet, particularly one high in fatty fish, fruits and vegetables. 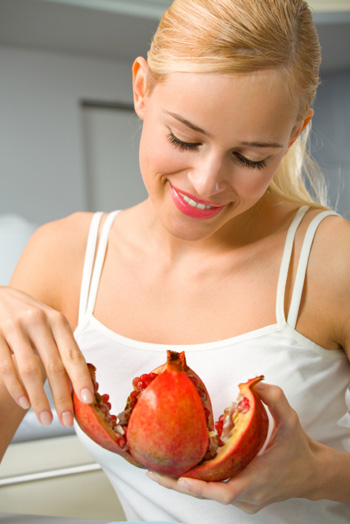 Research indicates that weight gain in adulthood boosts a woman’s risk of developing breast cancer. “A recent study found that women who gained 55 pounds or more after age 18 had almost 1.5 times the risk of breast cancer compared to those who maintained their weight, and a gain of 22 pounds or more is an increased risk of 18 percent,” says Dr Barry Sears, founder of The Zone Diet.

Dr Sears, a leading authority on the effects of diet on hormonal response, says inflammation is a primary factor in the development of breast cancer (as well as many other chronic diseases). “Increased inflammation causes the production of a wide variety of inflammatory mediators (hormones and proteins) to be released at the cellular level that lead to a depression of the immune system,” the medical expert explains. “Excess weight gain is also driven by inflammation. The more obese a person is, the greater the levels of inflammation in the body that can depress the immune system.”

A diet high in unhealthy fat, sugar, calories and processed foods can lead to obesity, but following a poor diet, even for people who are at a healthy weight, can lead to breast cancer. Dr Sears says, “A poor diet can be defined as one that increases inflammation and it is inflammation that is the driving force behind breast cancer as well as most other chronic diseases.” A healthy diet high in fresh fruits and vegetables and fatty fish will not only help with weight loss, more important, it will mediate inflammation throughout the body.

An anti-inflammatory diet is one that has been shown to decrease the production of inflammatory agents, explains Dr Sears. Diets, like The Zone Diet, that reduce glycemic load with a high consumption of fruits and vegetables as the primary source of carbohyrates, adequate low-fat protein sources such as chicken and fish, and primary use of olive oil have clinically demonstrated an anti-inflammatory effect in the body. Additionally, Dr Sears strongly recommends the exclusion of vegetable oils rich in omega-6-fats as the primary fat source in the diet because of the evidence suggesting an excess of omega-6-fats can lead to inflammation.

Fish high in omega-3s have long been extolled as a source of heart healthy fat as well as helpful in reducing systemic inflammation. The research on the anti-inflammatory effect of fish on cancer, most recently on breast cancer, continues to mount. A June 2009 study in the medical journal BMC Cancer indicates high consumption of omega-3-rich fatty fish is associated with a reduced risk of breast cancer for pre- and post-menopausal women. Omega-3s have even shown promise in boosting the effects of breast cancer treatment. The peer reviewed online journal Cell Division reported in April 2009 that DHA, an omega-3 fatty acid, reduced systemic inflammation, oxidative stress and leukocytosis as well as augmented the effects of cisplatin, a chemotherapy drug.

Omega-3s work at the cellular level

The preventative role of polyphenols

Foods rich in antioxidants are also key in reducing the risk of cancers. Antioxidants are found primarily in fruits and vegetables, low-calorie foods that are also high in fiber and other disease-fighting phytonutrients. In particular, research has demonstrated that polyphenols, the most abundant dietary source of antioxidants, possess anti-carcinogenic properties. “Polyphenols are the chemicals that give fruits and vegetables their color,” says Dr Sears. “In high concentrations, they can also suppress an overactive cellular immune response just like the omega-3 fatty acids. Reduce inflammation and you reduce the driving force for the development of and spread of breast cancer.”

Past research suggests that high-antioxidant foods, such as fruits and vegetables, show promise in fighting breast cancer, and recent studies continue to support it. The September 2009 issue of Integrative Cancer Therapies reported that pomegranate fruit extract lowered the metastatic potential in aggressive breast cancers. Another study published in the August 2009 issue of Breast Cancer Research and Treatment linked tea-derived polyphenols with anti-carcinogenic effects and a reduced risk of breast cancer.

Putting it all together

Following expert advice to consume a healthy diet goes beyond simply cutting portions, an extra apple or salad a day, or maintaining a healthy weight. That doesn’t mean, however, that your eating habits must drastically change (unless, of course, your diet is in dire need of a major overhaul). Dr Sears recommends a few very practical strategies in following a breast cancer fighting diet.

Diet tips to reduce your risk of breast cancer

1. Shop the produce aisle. Eat plenty of fruits and vegetables that are high in polyphenols, particularly ones that have lots of color like pomegranates, berries, winter squash, and leafy greens. These superfoods are known to have anti-inflammatory and antioxidant effects.

2. Supplement your antioxidant intake. With research indicating that the average American gets around two of the recommended five to 10 servings of fruits and vegetables a day, taking a high-antioxidant supplement can help you get some of the same nutritional benefits of produce.

5. Up your omega-3s. Due to the inflammatory component associated with breast cancer, increase your intake of omega-3s through fatty fish or supplements. Dr Sears suggests modest amounts of fish, such as salmon and sardines, as well as fish oil supplements.

Though October is National Breast Cancer Awareness and the perfect opportunity to alter your diet to reduce your risk of developing breast cancer, maintaining your breast cancer fighting food habits throughout the year is the best way to protect yourself from developing the disease along with other chronic diseases.

5 hrs ago
by Lauryn Higgins